Rare
Not content to just look like a Pylon, this Imp actually works part-time as a road cone. It may not be glamorous, but it's rewarding work and he's happy to have it.
Pylon Imp is a Rare variant of the Imp in Plants vs. Zombies: Garden Warfare 2. The Pylon Imp wears a cone on his head. His Z-Mech is a large robotic cone mech with one wheel, and it is faster than the typical Z-Mech but has the trade off of having 50 less health. The Pylon Imp was first teased in the Aloe 5: Gardening spoof, but was later shown in the Multiplayer Beta trailer, before being shown in short gameplay of the Backyard Battleground. He and the Z7 Imp were the only unlockable Imp variants in the beta.

Not content to just look like a Pylon, this Imp actually works part-time as a road cone. It may not be glamorous, but it's rewarding work and he's happy to have it.

The Pylon Imp's primary weapon is the Pylon Punishers. The Pylon Punishers has a trade off in ammo and attack speed, however, this makes up for its small splash damage. It can fire up to 16 shots (if not upgraded) in two-shot bursts before reloading. Like most other Imp variants' primary weapons, the projectiles suffer from severe bullet drop. When upgraded, each projectile deals 14-19 critical damage and 12-17 non-critical damage depending on the range, with the splash dealing 3 damage.

The Pylon Mech's primary weapon is the Pylon Propeller. It has 16 ammo, and deals 20-25 impact damage depending on the range, with the splash dealing 10 damage.

Despite having a very low ammo clip compared to other Imp variants, Pylon Imp is actually very useful in certain situations, as his primary weapon deals splash damage, which no other Imps can do. The Pylon Imp is very useful for vanquishing small groups of plants that have strayed from the rest of the group in Turf Takeover or Team Vanquish. This is because of the splash damage, which can do damage to many players at once.

The Pylon Mech is more based on speed rather than dishing out damage directly. Use the speed options of this mech to dodge attacks and deliver brutal splash damage to groups of plants. The Pylon Mech can also drop Pylon Mines, which can kill most plants at once, which makes it useful for Team Vanquish or Gardens & Graveyards. Drag Race is the Pylon Mech's unique touch, as it can rush in a groups of enemies, or be used for a quick escape, due to the lower health of the mech. A good strategy with the Pylon Mech in Gardens & Graveyards is to get into the garden, drop some Pylon Mines, and use Drag Race to get out of there. Proceed to deal damage from afar and the mines should allow your teammates to ease through the garden.

Remember that the Pylon Mech has the lowest health out of all the Z-Mech variants (300 HP), making it easier for plants to kill you, especially groups of them. Always be prepared to evacuate in case too much damage is being dealt. Always be on the move with the mech to avoid as much damage as possible as well.

If you are more of a sneaky player, try and get as close to the targets/objectives as possible without being noticed. Make sure your Gravity Grenade is/will be ready, as you're going to need it later! Summon the Pylon Mech and rush into the objective using your Drag Race to catch the plants by surprise. When you begin fighting the target, prep the Explosive Escape ability in case you need to eject. Moving Unpredictably, drop pylon mines as you progress throughout battle, especially inside objectives.

Also remember that when your Pylon Mech runs out of fuel, your Explosive Escape will automatically activate. Try and use this to your advantage by using your drag race ability to charge into groups of plants before running out of fuel. Once you eject from the mech, throw your Gravity Grenade at the mech to trap any plants that are (unfortunately) near the mech, forcing them to take damage from the explosion.

Pylon Imp's main counters are Roses, Sunflowers, and Citrons. Rose's special abilities are very dangerous, especially Arcane Enigma and Time Snare, as the former makes Rose immune to damage and the latter stuns Pylon Imp and disables special abilities. Citron's E.M.Peach is also devastating to Pylon Imp in the same way as Time Snare, except it does damage. It also disables his Drag Race ability, which is crucial to the survival of the mech. Sunflowers can heal and revive plants that have been damaged, and can strike back with its normal attack, Sunbeam, or Solar Flare Beam. While using these abilities, remember that they can be cancelled via Gravity Grenade. Vampire Flower and Stuffy Flower are very useful against Pylon Imp as they also regenerate health with each direct hit. However, still be careful, as they have low health and can be vanquished quite easily. 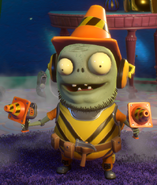 Pylon Imp in the Customization Booth 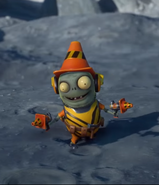 A close up of the Pylon Imp

A close up of the Pylon Mech 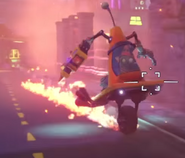 A Pylon Mech being deployed

Side View of the Bling Pylon Mech