Plants vs. Zombies Wiki
Register
Don't have an account?
Sign In
Advertisement
in: Archived, China exclusive, Under construction,
and 4 more

For the version in Plants vs. Zombies 2 (Chinese version), see PvP Mode. For the similar game mode in PvZ: AS, see Arena (PvZ: AS).

PvP Mode was a mode in Plants vs. Zombies: All Stars which was unlocked when the player reached Level 11. In this mode, the player got to fight other players and win prizes, from battling and their final ranking. This mode also featured a unique currency, star medals, which could not be used anywhere else.

When entered, the player saw their current ranking, their avatar, level, fighting force and acquired star medals. There were three other opponents shown in the menu, with their name and everything else mentioned above, except their star medals.

The player could fight opponents with higher or lower fighting force and levels, but was impossible to fight others with higher rankings than them.

They could choose their plants and rearrange them before fighting. In the battle, the player and opponent's plants were controlled by the AI, but immediately activated their special moves when one had been fully charged. If there had been a lane where there were no plants, another lane of plants was teleported to that lane to fight them, as long as the teleported plants had finished fighting.

If the player won, their rank increased, while the opponent had theirs decrease. They also received gems, depending on the difference of the player's and the opponents rank before the ranks were changed.

The player was able to reshuffle their opponents by exiting or pressing the "reshuffle" button.

A cooldown of 10 minutes was given when battle was over, though it could be skipped by paying 50 gems. The maximum number of battles the player was able to play in the mode per day was five.

Victories and losses of the player were recorded in this section, with the time and date for certain battles. Losses were mentioned with the opponent who defeated the player. Battles from other opponents had also been recorded. It also showed the avatar the player had when they entered the battle.

This section of the mode mentioned the highest 50 ranked players in the mode. Their name, level, fighting force and their avatar was shown. The player was able to see their chosen plants via the "check" button. The top 3 were given crowns to represent their number, gold as the first, silver as the second and bronze as the third. The others only had their ranked number.

After a tournament was over, the player was given specific prizes in their mailbox, depending on the rank they were in. The top 6's prizes had been consistent, while the numbers below continuously changed as their rank went up. They received tickets, coins, sun and medals. Medals were spent in a special shop of the mode, which the player could spend on Puzzle Pieces for plants, sun, weapons and armor. The items changed by themselves certain times in a day, but the player could change them themselves by paying 100 medals.

Claiming the complete prize from the player's mailbox

The shop to spend medals 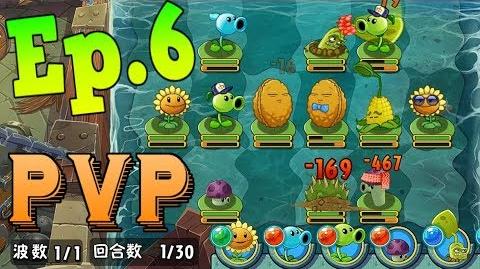 Plants vs. Zombies All Stars - PvP Mode. Fighting against players (Ep.6)
By Alex5432000
Community content is available under CC-BY-SA unless otherwise noted.
Advertisement