For the version in Plants vs. Zombies: All Stars, see PvP Mode (PvZ: AS). For another similar game mode in the same game, see Arena (PvZ: AS).

PvP Mode was a mode introduced in the 1.6.6 version of the Chinese version of Plants vs. Zombies 2. Unlocked after playing a few levels in the second world the player unlocked, this mode was extremely similar to I, Zombie and Zomboss Test Lab. Here, the player had to fight against other users' lawns with the help of zombies and set up his own defense to prevent the other players from assaulting their lawn.

The player collected medals, cups, and star coins for beating someone's lawn. Star coins were used to build the player's zombie army, paying to battle a lawn or house, and buying extensions in the Resource Wars. Cups could be used to get into a higher league (in League Leaderboard) or into a higher place (in Garden Leaderboard) which would give more bonus rewards including star coins and medals daily. The player would automatically receive 2000 star coins per day. They could also earn them by beating lawns, houses, or taking the rent from captured houses.

On the main menu of PvP there are five sections:

The player fought on another player's lawn for 30 star coins (星币). After destroying all the flags, the player would receive an amount of star coins, medals, and cups depending on the other player's status. The player could investigate the lawn (this is free, but after this, the player had to spend 100 star coins to fight), fight against this lawn for 30 star coins, or change the lawn for another one. There were also four power-ups for zombies. Each power-up cost some stamina. The cost increased after each use. At the beginning of battle, the player started with 100 stamina points. They would get 5 points of stamina by defeating a plant and 20 points for destroying a flag.

The list of Power Ups (Note: The effects are buffed once the Power Ups are leveled up in the Laboratory.)

There were two types of houses: the player's base and assets. The player could also set up their own defense at their base. Initially, they would have 1500 sun to spend, which could be increased to a maximum of 5500 sun in the Laboratory via upgrades. This allowed them to defend from having their cups deducted by other players when they destroyed the flags. The more stars they got, the more cups the player got deducted. One star was obtained for pulling down one flag, two for pulling down three flags, and three for pulling down all five flags.

All the obtained plants could be used, except sun-producing plants (like Sunflower), instant-use plants (like Cherry Bomb), Magnifying Grass, plants with no sun cost (like Iceberg Lettuce), Modern Day plants, Angel Starfruit, Cob Cannon, and some other Monthly Specials. The player could only plant 10 plants of the same type.

The player could attack and conquer other players' asset houses by spending 100 star coins to fight on the other player's lawn. There were in turn, two types of asset houses: other players' bases, and obtainable houses. The first offered the player another player's cups if they defeat their defenses and rewards a varying amount of star coins and 20 medals. This type of house's defenses were situated on the PvP Mode lawn. Upon defeating this type of house, it would be distinguishable from the second type of house by not being playable for one hour. The second type of house, the obtainable house, offers more benefits. This house's defenses were situated on either an Ancient Egypt, Pirate Seas, or Wild West lawn. Its appearance had the username of the player who controls it, a corresponding level, and the possibility of being captured. If the house was successfully captured (all 5 flags were taken down), the house, the lawn and all the plants there would be all theirs, and it would keep producing star coins and medals, which the player could later collect before the house gets captured by other players. The player could also manage the captured house's plant setup. Since every obtainable asset house had a different lawn and all of them were in a world's style (e.g. Pirate Seas or Wild West), these houses' defenses would generally only feature plants obtained in that world (A notable exception being the Wild West lawn, it contains Kongfu World plants too). Every obtainable asset house had its own level. The level increased with every capture and re-capture until it reaches the maximum level of 40. When leveling up, the lawn would add one additional plant or level up an existing plant for the defenses. This level does not exceed level 3 nor does the number of plants grow beyond 34 total on the lawn. On higher levels, the amount of star coins and medals produced would increase. If the house was hard to beat, the player could exchange it for a different one, and the level reset to the current level of the new house. They could also increase the amount of asset houses by dismissing the fog with star coins. The cost increased with every extension.

In this section, the player acquired zombies to use them in battle. The player could have a maximum of 40 zombie units, which could be upgraded to a maximum of 100 units in the laboratory. Every zombie had its own star coin cost, zombie unit capacity, and crafting time. When the volume of created zombies exceeded the max capacity, the production would be stopped until a zombie in the player's team got defeated, or the maximum zombie unit capacity was increased by upgrades. It was possible to sell zombies for half their star coin cost.

The records of the latest ten battles. The player can not only see the battles they have fought, but also see which opponent players have conquered their base or asset houses, and the player can attempt to get revenge on them if they want.

The player's base (the upper limit and gaining speed of star coins and medals), sun limit, zombies capacity, zombies, and Power Ups can be upgraded here.

Evil Dave's house appeared on the map every two days (Tuesday, Thursday, and Saturday), with six different preset lawn defenses for the player to tackle.

In English: The new "Plants vs. Zombies 2" PvP function has been turned on. Now play PvP, each winner will get a 10 diamond reward, and in a day, even 50! More wonderful achievements in PvP daily activity for you to challenge, rare plant puzzle pieces are waiting for you to obtain!

Building of your defense

Effective plants to use

Monkeyfruit: This plant is extremely powerful once reaching level 2, able to kill even level 4 Gargantuars quickly. It throws a staff that spins to deal great damage to all zombies in a small area, and remains for a while. Due to it's area of effect, the attacking player cannot get past the spinning staff by simply deploying more zombies. It is highly recommended to upgrade this plant to level 5, therefore.

Sweet Potato: This plant is effective at forcing the attacking player's zombies into a better protected or less dangerous lane. Also, the Fog of War Power Up cannot negate it's effect.

Squash: This plant has to reach level 3 before it becoming very useful. At level 3, depending on chance, it is possible for Squash to smash more than four times before disappearing, making it an extremely useful plant both offensively and defensively.

Chest-nut: This plant summons three chestnuts, which will move three tiles in front and protect the plant on that tile. More chestnuts will be summoned when upgraded. Instead of attacking the plant on the tile the chestnuts are on, zombies will attack the chestnuts. This is excellent for stalling Mummified Gargantuars. They may also become targets for Mecha-Football Zombie's Plague Pharmacy effect, hence protecting other, more important plants.

This strategy needs at least Level 3 Acidic Citrus and some Monthly Special plants.

Attacking other players with zombies

It is good to use Gargantuars as your main defense, if you have the highest army capacity, you can have an army like this:

Make use of the Power-ups as they have a very big range by default even without upgrading. Use Zombie Serum on the zombies when they are about to die and use the Plague Pharmacy on the Mecha-Football zombies to get rid of some random plants. When there are a lot of instant kills like Potato Mine or Squash, use the Plague effect on the Gargantuars to make use of their imps to destroy the plants. It is strongly recommended to upgrade the zombies to Level 4, or they may die easily. 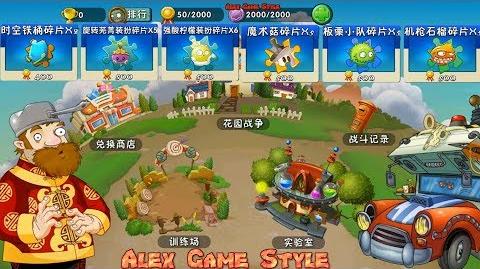 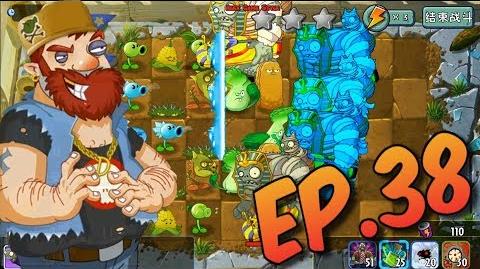