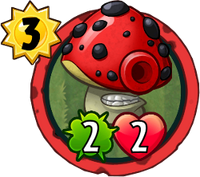 When a Mushroom is destroyed, do 2 damage to a random Zombie or Zombie Hero.
Believes revenge is best served. Period.
Punish-Shroom is a premium super-rare plant card in Plants vs. Zombies Heroes and a member of the

. It does not have any traits, and its ability does 2 damage to a random zombie or the zombie hero every time a mushroom plant or environment, including it, is destroyed.

It is based on the Hydnellum peckii, otherwise known as the bleeding tooth fungus.

Its name is a combination of "punish" and the hyphenated "mushroom." It may also be a pun on the word "punisher."

Its description is a reference to the phrase, "Revenge is best served cold."

Punish Shroom is a must in mushroom decks as its ability makes up for most mushrooms being easily destroyable and can put your opponent at a heavy health disadvantage, discouraging your opponent from taking control by playing heavy offense to wipe out your mushrooms. Your goals should be to get Punish-Shroom on the field as early as possible, as well as setting up a swarm up mushrooms to threaten your opponent. Aside from playing mushrooms yourself, Shroom for Two, More Spore, and Mushroom Grotto are able to make more mushrooms for the price of one. Also, to fully utilize this ability, it is best to play it on the rightmost lane, since in the "Fight!" phase, combat happens from left to right. Nightcap can assist Punish-Shroom on that aspect since he has access to Lily Pad.

This should be destroyed as early as possible individually. When you are going to play something that uses mass damage like The Chickening to destroy many mushrooms on the field, it is best to destroy this first with a single Bungee Plumber or Rolling Stone first to minimize its impact. Try not to use Weed Spray or The Chickening if there are a bunch of mushrooms on the field while Punish-Shroom is in play unless it can guarantee victory, because it can activate its ability before it gets destroyed, and without other zombies to block some of its damage (as the zombie is not destroyed until this ability has ended), the damage will go straight to you.

Alternatively, if you don't have tricks to destroy it, you can use

Armored or shielded zombies such as Planetary Gladiator or Trash Can Zombie to block some of Punish-Shroom's damage. If Punish-Shroom's ability attempts to hurt these zombies, all or most of the damage will be negated, wasting the ability. Tricks such as Camel Crossing can also give a better chance of survival to zombies without the aforementioned traits. Due to the randomness of Punish-Shroom's ability, a viable option is playing many weak targets such as Haunting Zombie to absorb the damage instead of you or other important zombies such as Toxic Waste Imp.