It has more health than a normal Weed, but it not as tough as a Terracotta Weed. It is the plant counterpart of Conehead Zombie.

With their damage-absorbing hats, Pumpkin Weeds are proud, strong, and always up for a fight.

In other modes, spawned Pumpkin Weeds will always have a set health of 90 HP.

The Pumpkin Weeds' primary weapon is called Weed Whip, it is a short range attack that deals 15 damage at a slow pace. Pumpkin Weeds will prefer to use their melee attacks, moving in closer to the target to attack them directly.

Seed Spit: A long ranged attack which deals 15 damage. Pumpkin Weeds will only use Seed Spit when their target is first sighted a long distance away, before moving closer towards the target to attack using their short ranged primary attack. Pumpkin Weeds use their ranged attack more frequently than their zombie equivalents. 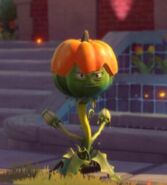