Pumpkins protect plants that are within their shells.

Can be planted on another plant

After beating Level 4-7
Pumpkin hasn't heard from his cousin Renfield lately. Apparently Renfield's a big star, some kind of... what was it... sports hero? Peggle Master? Pumpkin doesn't really get it. He just does his job.
Pumpkin is a plant introduced in Plants vs. Zombies. He is the 31st plant unlocked. He can be planted on other plants to provide an additional layer of protection.

For more information about this character, see Pumpkin.

Pumpkin is unable to be planted on Sea-shroom, Tangle Kelp, Grave Buster, Cob Cannon, and other Pumpkins. Pumpkin can be repaired with Wall-nut First Aid if it's unlocked.

Pumpkins are excellent at later levels, where the player needs to conserve as much space as possible. Catapult Zombies and Bungee Zombies always target the plant inside the Pumpkin first, so they are useless as protection against them. They can be used to buy time so that your plants have more time to take out Digger Zombies. The best plant to put inside a Pumpkin (for defensive purposes) is the Tall-nut, so Pole Vaulting Zombies or Dolphin Rider Zombies cannot jump over them, and the zombies will have to eat the Pumpkin and Tall-nut. Note, however, that he is not as efficient, sun-wise, as a Tall-nut alone; a Tall-nut and Pumpkin combo costs as much as two Tall-nuts, yet has only as much health as one-and-a-half. They are also useful for plants that the Imitater duplicates because he protects them as they transform.

Do not put plants that are supposed to be eaten into Pumpkin, such as Garlic or Hypno-shrooms. The zombies will have to eat the outside Pumpkin before eating the plant, so doing so will result in a waste of sun and seed slot recharge. Pumpkins are usually good along with Potato Mines, as they give Potato Mine time to arm, and once the zombies break through the Pumpkin, they will have come together onto one spot and will all be hit by the Potato Mine. The only problem with this is that because of their larger horizontal hit-box, Football Zombies will trigger the Potato Mine while he is inside the Pumpkin, only killing some of the zombies, as they will not all count as in range. As a result, it may make more sense to use a Wall-nut or Tall-nut to protect the Potato Mine instead, as they are cheaper or costs the same and will allow time for all of the zombies to get in range. This can also be a bad idea, though, as the Potato Mine may rise before the zombie even gets to the Pumpkin. To remedy this, if you want them to all get blown up, put him in the second or first column from the zombies.

Try to plant them on every plant except for Kernel-pults that you will upgrade into Cob Cannons, Spikeweed, Spikerock, Garlic, and Hypno-shroom.

When facing Gargantuars, put a Pumpkin around the plants in the third and second row so they are protected from the Imps they throw.

Almost all setups on Survival Mode use these. Because Pumpkins can surround other plants, when the player uses Pumpkins in conjunction with Wall-nut or Tall-nut, it is more convenient to extend their defenses. For example, if you use Tall-nut on column five in all rows and the defense needs to be expanded to six columns, the sun that is used for planting these Tall-nuts will be wasted, as they should be dug up, or there will not be enough spaces for placing new plants. If you use Pumpkins, just simply replace the plants without digging up the Pumpkins. Pumpkins are usually used to protect plants at sensitive positions.

These are also very useful in Survival: Endless because they are excellent space savers, and can be used to protect your more valuable plants (Winter Melon, Gloom-shroom, Twin Sunflower) from zombies. If a zombie makes it through your defenses and you are vulnerable, Pumpkins might be the only thing saving you from the zombies successfully eating your brain.

Pumpkin can also be used effectively for the Ladder Zombie strategy, which is pretty straight forward, get Ladder Zombies to put ladders on your main offensive plants especially Gloom-shrooms on the second column. Since the ladders are on all Pumpkins, Imps thrown by Gargantuars cannot eat your plants which results in saving a considerable amount of sun. Note that the ladders will disappear if they are hit by explosive plants, and Magnet-shrooms can remove them.

Pumpkin seed packet in the iOS and Android versions

Second degrade (designed but not used)

Pumpkin in the Nintendo DS version

A left-facing Pumpkin in Zen Garden

A small Pumpkin in Zen Garden

A medium-sized Pumpkin in Zen Garden

Peashooter inside a Pumpkin 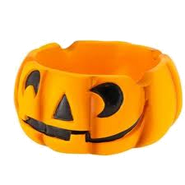