For other uses, see Puff-shroom (disambiguation).

None
He huffs and puffs and, occasionally, blows a Zombie down.

Puff-Shroom is a colossal uncommon plant card in Plants vs. Zombies Heroes and a member of the

Kabloom class. He can also be made by Shroom for Two, Mushroom Grotto, and Witch Hazel. He costs 0

. He has the Team-Up trait and does not have any abilities. His closest zombie counterpart is Swabbie.

In the boss fight of the mission Mushroom Mayhem! and in all battles of the mission No Vacation at the Volcano, a Puff-Shroom is automatically made on a random lane at the start of every turn.

His sun cost of 0 is a reference to how he also costs 0 sun in the previous games he has appeared in.

His description is a reference to the Big Bad Wolf from the fairy tale The Three Little Pigs. In the mentioned fairy tale, the wolf says that he will "huff, and puff, and blow your house down," every time he encounters one of the pigs' homes.

He huffs and puffs and, occasionally, blows a Zombie down.

Treat this as you would with other cheap Team-Up plants. Puff-Shroom can act as a cheap shield to protect an important plant of yours. Additionally, because he is part of the mushroom tribe, you can use Buff-Shroom to boost him or Punish-Shroom to do 2 damage to a random zombie or zombie hero when he is destroyed.

Puff-Shroom works well in zoo decks because you can take advantage of its cost to play several of them in one turn, boosting any Muscle Sprouts or Go-Nuts, or having more plants on the field for more Pineclones. Playing it on Mushroom Grotto makes it even better, because it will be making more Puff-Shrooms for the same number of cards. It also works well with all Evolution plants excluding Jelly Bean, Gatling Pea, Loco Coco, and Strawberrian, acting as a free plant to Evolve on without wasting any sun.

While Puff-Shroom is no threat, owing to his low stats, he can be quite a nuisance in the early-game when he is made by Shroom for Two because they can do 2 damage, which can be doubled via Buff-Shroom for just 2

. If you have tricks like Rolling Stone, Nibble or Bungee Plumber, it is advised to target Puff-Shroom before Shroom for Two as the latter does not have Team-Up, and Puff-Shroom may end up as a shield for another powerful plant.

As for Puff-Shroom himself, any solution against a 1 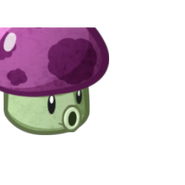 Rolling Stone being used on Puff-Shroom

Cut Down to Size being used on Puff-Shroom 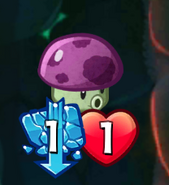 Gardening Gloves being used on Puff-Shroom 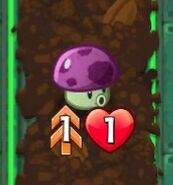 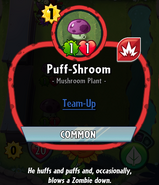 Puff-Shroom's card
Add a photo to this gallery

Retrieved from "https://plantsvszombies.fandom.com/wiki/Puff-Shroom_(PvZH)?oldid=2249036"
Community content is available under CC-BY-SA unless otherwise noted.