Special
Psychedelic Goats don't last quite as long as their normal counterparts, but they are much harder to control.
Psychedelic Goat is an alternate ability of the Goatify for the Rose in Plants vs. Zombies: Garden Warfare 2. When Goatified, the zombies will experience an effect similar to the Hypno-shroom's Hypno Leech effect, as you will have a blurry, purple screen and it will be hard to control your character. However, the Psychedelic Goat's effect is much more severe in which it's nearly impossible to control your character, for example as not doing anything will still move your character around. However, you will only be Goatified for 5 seconds as opposed to the normal Goatify's 7 seconds. The goats appear purple, and have swirls around their head, while wearing headbands.

Psychedelic Goats don't last quite as long as their normal counterparts, but they are much harder to control.

If you can successfully Goatify a zombie then you will more than likely find it easier to vanquish it. This is because not only do your opponents lose their sense of direction, but since they are much easier to see than normal goats, this will also alert your teammates and they will hopefully be able to help you out. Other than that, strategies with the normal Goatify will also apply here, as the abilities are very similar mechanic-wise, but keep in mind that your opponents will not be Goatified for as long.

Due to the ability's effect, there isn't much you can do other than to charge as you may be able to escape the Rose who Goatified you, or if the Rose is at low health, may even vanquish her as the Stinky Goat Ram will still deal 25 damage. 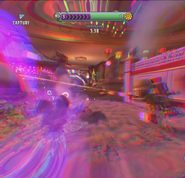 The Goat's appearance when Goatified