For the version in Plants vs. Zombies 2, see Prospector Zombie.

Prospector Zombie is a zombie in Wild West in Plants vs. Zombies: All Stars. His ability is to use his dynamite to damage a plant and kill himself, and the boss form can use it to deal damage to many plants which does not affect him. The boss form has about seven stages of health and takes seven turns to activate his skill, which is exploding all plants and blowing himself out of the lawn. Also, cold attacks cannot extinguish his dynamite.

He isn't that tough. By the time you encounter him, your plants should have enough health and defense to live through his attack. Since his attack kills himself, you only need to worry one turn with him. If your plants are somehow low on health, you can use your Healing plants to easily recover any damage taken.

Be careful as his normal attack deals huge damage to multiple plants at once. Although his boss skill kills himself when he activates it, he will only use it six turns from his first turn unlike other bosses who use their boss skill four turns from their first turn and it does huge damage. He is also accompanied by three Pianist Zombie that do damage to your backmost plants. Using the Wall-nut line for the defensive ability, plants whose ability either stun the target such as Tai Choy, Meteor Hammer Master, and the Kernel-pult line, or freeze the target such as the Snow Pea line and Winter Melon are your best bet to reduce the number of turns that the Prospector Zombie needs to use his boss skill (or reduce the damage taken for the Wall-nut line). 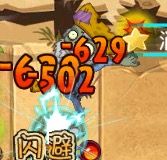 About to put the dynamite into the plants

Putting the dynamite into Choy Ji 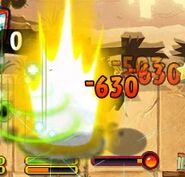 Dynamite exploding, deals damage to both Prospector Zombie and the plant

A dead Prospector Zombie
Add a photo to this gallery 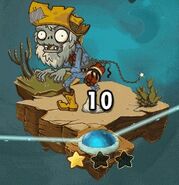 Boss Prospector Zombie on the map

About to attack (Note that the plants explode before he attacks)

His skill (Stage 3)
Add a photo to this gallery
Retrieved from "https://plantsvszombies.fandom.com/wiki/Prospector_Zombie_(PvZ:_AS)?oldid=2221265"
Community content is available under CC-BY-SA unless otherwise noted.