Throughout the Plants vs. Zombies series, many zombies have been seen which are promotional material or small cameos in-game. These zombies were never intended to appear within the games, and they most likely never will.

Vampire Imp is a zombie that only appears in the YouTube video Stop Zombie Mouth! It is behind two graves that say Hal Atosis and Ginger Vitus, two mouth disorders caused by not brushing teeth (see Wikipedia articles for halitosis and gingivitis). It is an Imp with a vampire's cape, but not much is seen because it is hiding behind the graves.

Zombie Queens appear in the PopCap advertisements. So far, only three are seen, and since the ads were meant to promote the first game, it is likely no more will appear. The first is a somewhat obese zombie with yellowish skin, wearing a tiara, messy lipstick, and a pink bow in its hair. It has somewhat the resemblance of Catapult Zombie. The second is not fully seen, as only a closeup of its chest is in the advertisement, but it has more green skin, a brown cloak with fancy patterns, and red nail polish. The final one has grayish-green skin similar to other zombies in the series, is fairly skinny, has long hair topped with a crown, and a long red dress. 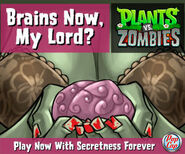 The closeup of the second Zombie Queen 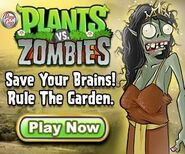 The third Zombie Queen
Add a photo to this gallery

Sunflower Zombie is just a Sunflower in a Flower Pot with a zombie or an Imp head. It's a decorative object that appears on the lawn and it will be just "dancing" as a normal Sunflower does. It has also an official artwork as seen in the official PopCap Games Facebook page. The artwork was posted on May 2, 2012. 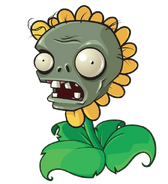 Sunflower Zombie artwork as seen on the Plants vs. Zombies Facebook page

Sunflower Zombie in the Xbox 360 trailer

Where Sunflower Zombie is in the Xbox 360 trailer 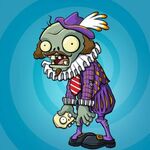 The Shakespeare Zombie is a zombie that can only be found on the Facebook Timeline for Plants vs. Zombies. The zombie is accompanied with the text "To brain or not to brain. That is the question. The answer is yes."

Multi-Colored Super Brainz is a zombie that appears when the player buys Plants vs. Zombies: Garden Warfare 2 on Origin. It is sitting next to an Imp with a game controller. It is a Super Brainz with a purple cape, blue gloves, a ripped yellow spandex suit, and a customization on its head.

This King Zombie is simply a Basic Zombie with a crown, a cape, and a septer.

Harpoon Gun Zombie is a zombie first revealed in a promotional banner on Weibo. It was planned for Big Wave Beach, but scrapped. 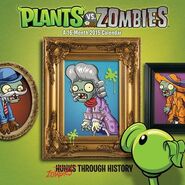 Zombie themed after aristocrats from England up to 300 years ago 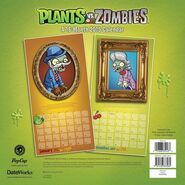 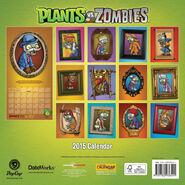 Shot showing many different history-themed zombies, including ones based on Vikings, hippies and greasers from the 1960s in the United States, prehistoric cavemen, and astronauts, as well as featuring previously mentioned zombies.

Ancient Rome-themed zombie
Add a photo to this gallery

In a trailer for Plants vs. Zombies Online, it shows what seems to be a Buckethead Zombie with his son.

Chinese New Year Animation Trailer (植物大战僵尸Online) (With Buckethead Zombie's son) (Uploaded by playcow, made by Popcap china)
Add a photo to this gallery

This zombie was in a post on the Plants vs. Zombies Facebook for the London 2012 Summer Olympics. He is a zombie with a body like the Pole Vaulting Zombie and boxing gloves.

This zombie is on the Plants vs. Zombies Facebook for the Super Bowl XLVIII and for the team "Zeahawks" a fake team. This zombie is a blue all star with a flag that has a 12 on it.

This is a banner on the Plants vs. Zombies Facebook. It has zombies in a Wall-nut, Crazy Dave, Umbrella Leaf, and Sunflower costumes. a Balloon Zombie can be seen in the background in a Coffee Bean costume.

This zombies has been in one ad one the Pants vs. Zombies Facebook. It is a zombie in a bunny costume.

This Zombie appears for an advertisement in Penny's Pursuit for Plants vs. Zombies 2, to sell his limited time Caeser's Grand Plant Bundle. He seems to be on a pillow, possibly on top of a unseen column. He is also seen holding what seems to be either rach dressing or lotion.

Caesar Imp in an Advertisement for Penny's Pursuit.
Add a photo to this gallery
Retrieved from "https://plantsvszombies.fandom.com/wiki/Promotional_zombies?oldid=2230648"
Community content is available under CC-BY-SA unless otherwise noted.