For the version in Plants vs. Zombies: Garden Warfare 2, see Sasquatch.

Zombie Evolution: All Zombies get +2

.
What's for lunch? Mostly solid stone.
Primeval Yeti is a colossal rare zombie card in Plants vs. Zombies Heroes and a member of the

He does not have any traits, and his Zombie Evolution ability gives all zombies, including him, +2

Much like Zombie Yeti and Cosmic Yeti, he is based on a Yeti, albeit one from prehistoric times. He may also be based on the Sasquatch, more commonly known as Bigfoot.

He might also have been inspired by the zombie boss in Plants vs. Zombies: Garden Warfare 2 with the same appearance.

Alone, he has below average stats for his cost. However, his Evolution ability can quickly turn the tide in your favor, essentially making a 4

zombie, then playing a Monster Mash. Of course, you need a zombie for Evolution, so be sure to pack some disposable zombies. Neptuna and The Smash have Swabbie and Goat, both of which are free; Swabbie even lets Primeval Yeti Evolve on the aquatic lane.

Because of his pet tribe, The Smash can use this in a pet deck with Cat Lady and Zookeeper, and he will be a huge help due to pet decks being swarm decks. The only issue would be to hold out until turn 5 without any negative consequences, which can be hard for a pet deck.

If played without Evolution, this is not particularly threatening. You can use tricks like Lawnmower, or plants with 4

or more, like Gatling Pea, to take it out. The real problem comes when it is played on another zombie. 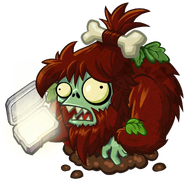 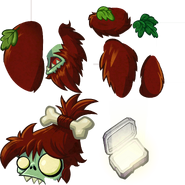 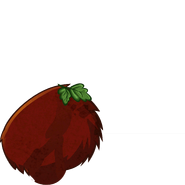 Unevolved Primeval Yeti with the 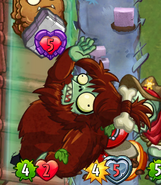