When played: Conjure a card that costs 4

or more.
You can't be destroyed by a Rolling Stone when you basically are a Rolling Stone.
Primal Wall-Nut is a triassic super-rare plant card in Plants vs. Zombies Heroes and a member of the

to play and has 9

. It has the Team-Up and

Untrickable traits, and its ability Conjures a card that costs 4

or more when it is played.

Its description refers to how it cannot be destroyed by Rolling Stone, a trick, due to its

Since Primal Wall-Nut has high health, its primary function is to block damage. While it does cost a bit more than the other blockers like Wall-Nut and Water Chestnut, Primal Wall-Nut differentiates by its

Untrickable trait, preventing cards like Rolling Stone from being played on it, making it better than the former two in many cases.

Its Conjuring ability can give powerful cards and be used to activate Dino-Roar, although you must take caution when using this if Quickdraw Con Man is on the field. As Citron or Beta-Carrotina, you can play Rescue Radish to Bounce Primal Wall-Nut (preferably when it is severely damaged) to activate this ability again.

Because of its nut tribe and high health, it works well with Mirror-Nut and Pecanolith and can be used to Evolve Loco Coco, although doing so would be a waste as there are cheaper and more expendable nuts to use, such as Wall-Nut. And because of its Team-Up trait, you can use Go-Nuts to boost its strength, although you can only usually do this as Citron or Beta-Carrotina.

The most important thing to remember when fighting this is that you cannot play tricks on it, and that is another level of annoyance for you. However, you can still dispose of it easily with

Deadly zombies. Certain zombies with instant-kill abilities can destroy this too, such as Primordial Cheese Shover, Chum Champion, and Celestial Custodian, although these require certain conditions to activate. If you don't have any of these, you can use Quickdraw Con Man to at least punish your opponent for playing this. 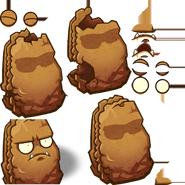 Primal Wall-Nut on its first degradation on the field

Primal Wall-Nut on its second degradation Fused with Pumpkin Shell