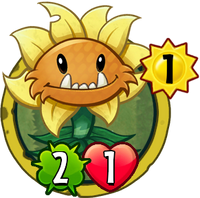 For the version in Plants vs. Zombies 2, see Primal Sunflower.
For the modern-day variant, see Sunflower.

.
Sunflowers are notorious pacifists. But isolated in the center of Hollow Earth, they evolved a new savagery. Sunny, adorable savagery.

Primal Sunflower is a colossal super-rare plant card in Plants vs. Zombies Heroes and a member of the

Its description is a reference to how Sunflowers are not offensive plants in most games.

Sunflowers are notorious pacifists. But isolated in the center of Hollow Earth, they evolved a new savagery. Sunny, adorable savagery.

If protected well, Primal Sunflower could prove to be one of the best 1

cards in the Solar class.

, giving it offensive properties as well. This means that it will give you additional sun the next turn and do damage to your opponent if it survives the current turn.

However, since sun-producing plants are prioritized due to their threatening ability, the chances of Primal Sunflower surviving after turn 2 are very low, unless your opponent is setting something up themselves. Another unfortunate thing is that Primal Sunflower does not have the Team-Up trait, unlike Sunflower. So unlike Sunflower, who can be defended with other plants, Primal Sunflower has to defend for itself. There is one major exception; if you play as Wall-Knight, there is a wide range of nut plants that you can select from to defend it, examples being Wall-Nut, Water Chestnut, Primal Wall-Nut, Mirror-Nut, and Pea-Nut. While other heroes also have Team-Up plants, theirs are much more frail than Wall-Knight's.

Chompzilla and Wall-Knight can remedy its lack of Team-Up via stat-boosting cards such as Lily of the Valley and Steel Magnolia. As Rose, she can Bounce zombies out of the way or

Freeze zombies to preserve it. And finally, Solar Flare can use it to ramp up to a Pineclone play with many weak plants and Primal Sunflower itself being turned into Pineclones. Primal Sunflower also fits in nicely with a flower deck, since it can be used as cheap bait for Briar Rose or heal you if Power Flower is on the field.

Primal Sunflower is a nuisance in the early game. Just like any other sun-producing plant, it can put your opponent at a huge advantage the following turn, and it has some base strength that lets it fight back. Fortunately, Primal Sunflower's lack of Team-Up gives it fewer options to defend itself. And with a measly 1 health, taking out Primal Sunflower itself is never an issue.

Should Briar Rose be on the field to punish any attempts to destroy Primal Sunflower, throw in an expendable zombie to make an exchange if possible. Otherwise, play any damaging or instant-kill trick to safely remove it. 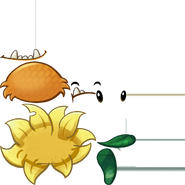 Primal Sunflower attacking from the opponent's point of view

Two Primal Sunflowers on a lane due to Pair Pearadise's ability

Primal Sunflower with the

Primal Sunflower with the

Primal Sunflower Fused with Eyespore
Add a photo to this gallery

Retrieved from "https://plantsvszombies.fandom.com/wiki/Primal_Sunflower_(PvZH)?oldid=2294738"
Community content is available under CC-BY-SA unless otherwise noted.