For the version in Plants vs. Zombies 2, see Primal Potato Mine.

When destroyed: Do 3 damage to a Zombie here.
Hidden long ago in Hollow Earth, Dinosaurs ran rampant in The Land Before Mine.
Primal Potato Mine is a colossal uncommon plant card in Plants vs. Zombies Heroes and a member of the

. He does not have any traits, and his ability does 3 damage to a zombie on his lane when he is destroyed.

He is based on the eponymous plant in Plants vs. Zombies 2 with the same name and appearance. But unlike his counterpart, Primal Potato Mine is only able to damage one zombie in his lane upon being destroyed.

His description is a reference to The Land Before Time, an animated movie series created by Don Bluth about dinosaurs.

Hidden long ago in Hollow Earth, Dinosaurs ran rampant in The Land Before Mine.

Primal Potato Mine can destroy any turn 1 play excluding Planetary Gladiator and Cat Lady, and he is one of the few cards that can remove Quickdraw Con Man completely on turn 1. However, as he does not have the Team-Up trait, you will have to rely on only him to do damage there, unlike Potato Mine. This essentially makes him very similar to Bonk Choy, except for the fact that your opponent can't save their zombie by destroying him beforehand.

Primal Potato Mine is a powerful removal card early on in the game that can destroy tough 1-brain zombies such as Iron Boarder and Arm Wrestler, so it is advised to treat him with caution. Although there is nothing you can do if your opponent plays him to intercept a zombie on turn 1, you can either play tricks or a disposable zombie to basically waste him if Primal Potato Mine is on an empty lane a bit later in the game, although most smart players will only front zombies with this card. 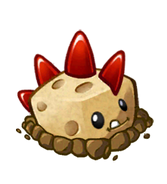 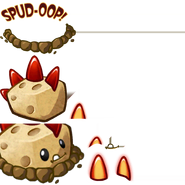 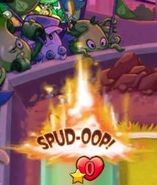 Primal Potato Mine destroyed/activating its ability

Gardening Gloves being played on Primal Potato Mine

Primal Potato Mine made by Seedling's ability