For the version in Plants vs. Zombies 2, see Primal Peashooter. 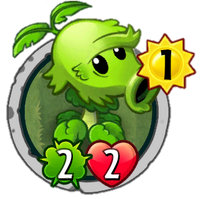 When this hurts a Zombie, Bounce that Zombie.
Found in groups of 3, 5, 7, 11, and 31.
Primal Peashooter is a triassic uncommon plant card in Plants vs. Zombies Heroes and a member of the

. It does not have any traits, and its ability gives any zombie it does damage to the Bounce effect.

Its ability is based on its ability to knock back zombies in said game.

Its description and its statistics (excluding its cost, technically) make a reference to prime numbers, which are numbers only divisible by one or itself, and how "primal" sounds similar to "prime" (1 is not considered a prime number, but 2, 3, 5, 7, ,11 and 31 are).

Although this plant is decent for a 1-sun plant, there are better turn 1 plays to make than it. Instead, Primal Peashooter's main use is to Bounce zombies that are causing trouble on the field for a cheap price.

. However, only Green Shadow, Citron, and Beta-Carrotina can boost Primal Peashooter's health to use it for long.

Just like any Bouncing card, good zombies to Bounce include those that get more dangerous the longer they stay on the field, such as Energy Drink Zombie, Aerobics Instructor, and Unlife of the Party, as well as Nurse Gargantuar as a special example as their abilities will not activate even if they do damage, while bad choices are zombies with "When played" abilities, unless Primal Peashooter has enough strength to destroy them instead.

Freezing cards can stop it from attacking, while shielded zombies and Knight of the Living Dead (only if Primal Peashooter's strength isn't boosted at all) do not take damage from its attack. Primal Peashooter is also limited in terms of placement, and cannot deal with threats on aquatic lanes unless it is played on Lily Pad.

Primal Peashooter may be a weak plant statwise and will most likely be destroyed after one attack, but its ability is dangerous since it can Bounce your zombies and remove their boosts. Not even

Frenzy zombies will do a bonus attack after destroying Primal Peashooter.

You can take advantage of its ability by playing zombies with "When played" abilities on Primal Peashooter's lane. However, if your zombie becomes a bigger threat than its ability, your opponent may not hesitate to Bounce it.

If you don't want your zombies to lose the boosts, then you can shield zombies with Escape through Time, Zombie Coach, or Zombot Battlecruiser 5000, since Primal Peashooter's ability only activates when it hurts the zombie. You can also choose to either remove its strength with cards like Shrink Ray and Landscaper, or play tricks to destroy Primal Peashooter before it can attack, efficient examples being Rolling Stone, Bungee Plumber, and Weed Spray unless Primal Peashooter gains stats. And finally, you can

Freeze Primal Peashooter with Frosty Mustache, Ice Pirate, Unthawed Viking (preferably Evolved), or Cryo-Yeti to prevent it from attacking for a turn. 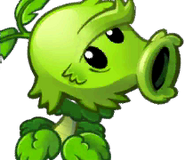 Embiggen being played on Primal Peashooter

Evaporate being played on Primal Peashooter

Primal Peashooter tinted gray due to a glitch