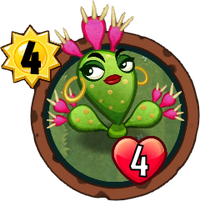 When hurt: Do 4 damage to a Zombie here.
"You hurt me, I hurt you. That's how this works."
Prickly Pear is a premium rare plant card in Plants vs. Zombies Heroes and a member of the

. It has the Team-Up trait, and its ability does 4 damage to a zombie on its lane every time it takes damage.

It is based on the plant in real life with the same name.

Prickly Pear acts like Wall-Nut, but is more expensive and has less health. However, unlike Wall-Nut, which only blocks hits, Prickly Pear can retaliate back when hurt, and with an offensive plant behind, makes quick work of a majority of zombies. Due to this, you can guard a plant with no strength and still take care of any zombie on its lane. Prickly Pear can be boosted by Spineapple too, giving it some base strength.

or less combined with Prickly Pear, clearing the lane and allowing Hibernating Beary to land a hit directly at your opponent. However, you should beware of Rocket Science.

But do note that Prickly Pear's ability does not activate if it is instantly destroyed and that its ability cannot harm your opponent. Therefore, your opponent may take advantage of it and either play an instant-kill card or harm Prickly Pear while there are no zombies facing it.

Prickly Pear is a dangerous plant if you do not counter it well. 4 damage is quite a lot against almost all zombies that can be played on the fourth turn, destroying or heavily damaging them.

Because it does damage whenever it is hurt,

Freezing it or doing a bonus attack will not do your zombie any good since it will get hurt anyway, as it would when it hurts Prickly Pear normally. It is best to destroy it in one hit, requiring a zombie with 4 or more strength.

Deadly zombies can also be a replacement for the aforementioned example.

Retrieved from "https://plantsvszombies.fandom.com/wiki/Prickly_Pear?oldid=2355180"
Community content is available under CC-BY-SA unless otherwise noted.