Attack for 5 damage in the middle lane.
Green Shadow's approach is right down the middle.
Precision Blast is Green Shadow's premium legendary plant signature superpower trick card in Plants vs. Zombies Heroes and a member of the

to play, and its ability instantly does 5 damage to whatever is on the middle lane.

Green Shadow's approach is right down the middle.

Due to its cheap cost and its capability of doing a high amount of damage, Precision Blast is a good trick to play early-game, mid-game, and even late-game. You could play this early to get 5 damage on your opponent, but it is usually better to damage any troublesome zombie fighters on said lane with this trick instead, as Green Shadow does not have removal cards.

Playing cards that can move zombies such as Sweet Potato and Whipvine with this trick can be used as a good combo to take out a high priority target on any other lane, as they can move said target onto the middle lane, allowing you to strike it with Precision Blast.

However, this trick has a very obvious weakness, since it can only be played on the middle lane. This means that your opponent can play powerful zombies on all lanes but the middle lane to wreak havoc without worrying about this trick. Hence, you may do 5 damage to your opponent, but the damage trade-off may be a bit too huge in such situations.

Make sure your opponent does not have a particularly full Super-Block Meter; otherwise, you run the risk of wasting your Precision Blast. Additionally, avoid playing Precision Blast if there is a gravestone, a shielded zombie, or an

Untrickable zombie on the center lane as it will not get harmed and waste Precision Blast.

Note that despite being classed as a card in the pea tribe, The Podfather and Torchwood do not synergize with it.

Or even better, stop her from playing this trick entirely by playing a Gravestone zombie. As any Sneaky hero, you can hide that zombie in a gravestone if it's in the middle lane with In-Crypted, Mixed-Up Gravedigger and Cursed Gargolith. However, beware of Grave Mistake. 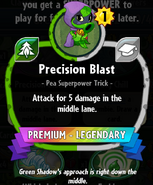 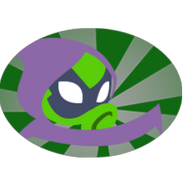 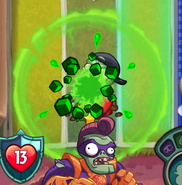 Precision Blast being played to defeat The Smash (animated) 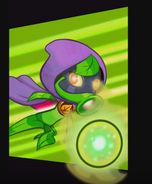