The Power Flower came from over-tanning one day, absorbing too much of the sun's strength. This caused her to continuously vent a powerful energy.

The standard Sun Pulse has been replaced with an attack called Power Pulse, which has less ammo than a standard Sunflower (from 40 to 50 when upgraded) but has an electric effect added to her attacks, allowing crowd control if an enemy is hit in a group.

Power Pulse is the primary weapon of Power Flower; all facts below apply to a fully upgraded weapon.

The Power Flower's primary weapon is the Power Pulse. It deals less damage than the default Sunflower at about 7 to 9 impact and 8 to 10 critical damage. However, it compensates for this by doing electric splash damage, about 5 to 7 damage.

While whiplash is bad, faster reloading is good. So it's worth it!

The Power of Powers creates a more powerful charge.

Power Sunflower is good at crowd control since if her projectile hits one zombie, all others nearby will get damaged as well. This makes the Power flower good at dealing with large swarms of weak Spawnable Zombies since as long as they remain clustered, they are vanquished easier. The Power Flower is also good at softening up groups of zombies before allowing a Cactus or Peashooter to finish them off, making this Sunflower a valuable asset when the zombies are mounting on a group-rush or a large offensive push.

In one on one situations, the Power Flower excels over other Sunflowers due to her increased damage and increased rate of fire. 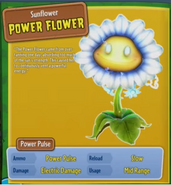 Power Flower's stickerbook page
Add a photo to this gallery

Power Flower in-game
Add a photo to this gallery
Retrieved from "https://plantsvszombies.fandom.com/wiki/Power_Flower_(PvZ:_GW)?oldid=2336117"
Community content is available under CC-BY-SA unless otherwise noted.