Rare
The Power Chomper studied battle tactics from the Fire Chomper. He charges in on Zombies as well, but instead utilizes an electric spray.

Rare
The Power Chomper studied battle tactics from the Fire Chomper. He charges in on Zombies as well, but instead utilizes an electric spray.
Power Chomper is the Rare electric variant of the Chomper in Plants vs. Zombies: Garden Warfare and Plants vs. Zombies: Garden Warfare 2. He is unlocked through various Sticker Packs and is one of the five electric variants on the plant's side.

The Power Chomper studied battle tactics from the Fire Chomper. He charges in on Zombies as well, but instead utilizes an electric spray.

Electric Spray replaces the main Chomp attack from the normal Chomper. It is only useful at close range, which deals with a minor of six to ten major damage continuously as long as it is active. The electricity arcs from zombie to a zombie. If used for too long, it will fizzle out, and you will need to wait for two seconds for it to recharge. The Power Chomper is still able to instantly vanquish any enemies from behind, as it is a Chomper variant.

Digests Zombies faster by shocking them with electrified innards.

Power Chomper must be played as a close-range character, or else your primary weapon will not be able to do anything to opponents. Flanking your opponent is key to using Power Chomper effectively. If you move around your opponent as you attack, you will be able to prevent your opponent from attacking you as you dish out damage. Goop or Sticky Goop can help with this cause. 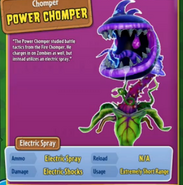 Power Chomper with Electro Pea, Power Cactus, and Electro Citron in the trailer 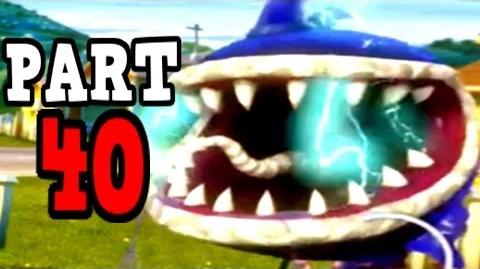