Rare
The Power Cactus specializes in blasting opponents with electricity from extremely long ranges.
Power Cactus is the Rare electric variant of the Cactus in Plants vs. Zombies: Garden Warfare and Plants vs. Zombies: Garden Warfare 2. She has the same abilities as the regular Cactus, but her projectile deals a chain lightning effect (uses electricity to add damage to any enemies near the one the player hits) to the zombie it hits.

Power Cactus is a Cactus with a sky-blue body and green bottom. The mouth of the Cactus filled with an electrical plug. The eyes are a glowing blue and there are electric sparks flashing near its body.

The Power Cactus specializes in blasting opponents with electricity from extremely long ranges.

Electric Needle is the primary weapon of Power Cactus; all facts below apply to a fully upgraded weapon.

The Power Cactus' primary weapon is the Electric Needle. It deals less damage than the standard Spike Shot at 15 to 20 impact damage and 18 to 24 critical damage, but compensates for this by dealing up to 15 electric splash damage to any surrounding zombies.

With a charged spike-reload, the reload time is reduced.

Ammo capacity increased with a stockpile of electric spikes.

The Power Cactus has one of the most potent weapons of any Cactus variant, due to above average damage and fast movement speed of her projectiles. Long range combat is where she excels, as she can deal a lot of damage to enemies who cannot see you coming. Proper accuracy is essential, however, due to her limited ammo and so-so reload speed.

Consider prioritizing larger opponents when shooting as they are generally easier to hit. Shooting at the biggest Zombie amongst a group of other Zombies is a great way to deal with small and fast enemies that are hard to hit, like the Imp and Scientist. This also effectively vanquishes nearby Zombies that are low on health. Close range combat is not advised as this variant- if you are caught in melee combat, drop a few Potato Mines around before you try to make an escape.

The Power Cactus may not be much of a threat in a 1v1, but she is a serious problem for your team if you're all close to eachother. Try to keep your distance from your teammates (especially Imps), as any shot that you take from the Power Cactus, will also damage them. Super Brainz is a great counter (if played correctly). As Super Brainz, try to sneak around the Power Cactus and attack her from behind. All Cacti aren't that effective at close range. 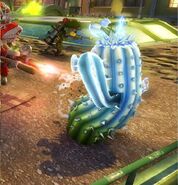 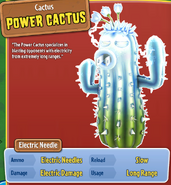 Power Cactus in the Stickerbook

Power Cactus with Power Chomper, Electro Pea, and Electro Citron in the trailer