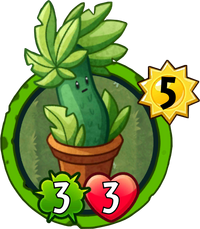 While in your hand: This gets +1

when a Plant gains Strength or Health.
She loves living out of a pot. It's not for every Plant. But to her, it's home.
Potted Powerhouse is a premium super-rare plant card in Plants vs. Zombies Heroes and a member of the

every time a plant gains strength, health, or both on the field while she is held in the plant hero's hand.

It is currently unknown what exact plant Potted Powerhouse is based on, but she somewhat appears to be a zucchini with leaves sprouting around it. It does not have the Squash tribe, however.

She loves living out of a pot. It's not for every Plant. But to her, it's home.

Potted Powerhouse can be a devastating plant if played well, similar to how a Valkyrie will end up in the hands of Professor Brainstorm . Her ability can be paired with self-boosting plants such as Muscle Sprout and Doubled Mint, or with most dinosaur plants that boost Strength or Health (think Apotatosaurus, Bananasaurus Rex, Tricarrotops, Veloci-Radish Hunter, and Veloci-Radish Hatchling), and if protected with a plant with the Team-Up trait or with more health, she can end the game very early. Shielding this plant with the superpower Root Wall is a good idea to avoid damage from zombie tricks or fighters, but only if you are Grass Knuckles. Take note that healing abilities in plants like Geyser do not boost the Potted Powerhouse, even if the health increases.

Anti-Hero plant is removed, (either by destroying or moving it), the

Anti-Hero ability activating on the plant will, in turn, activate this plant's ability. Only Captain Combustible can do this normally. You can also use Banana Peel to move the zombie blocking it back and forth. If you get lucky enough, you will keep Conjuring another Banana Peel, boosting Potted Powerhouse even more.

Consider playing Plant Food or Espresso Fiesta when this plant has high strength as she would most likely get destroyed immediately or blocked by a zombie. This will damage whatever is in front of her for a lot, assuming Potted Powerhouse has been boosted enough.  Of course, Espresso Fiesta costs 8 sun so it's impossible to play them in the same turn. DO NOT play this plant when Three-Nut is on the field, however, as their ability will effectively set her strength to 3 (Grass Knuckles only).

, requiring you to boost her again.

If you leave this plant and other self-boosting plants alone, she could become a tremendous threat. Try disposing of this plant as soon as possible. When fighting against a Mega-Grow hero, try to focus on getting rid of any plants that boost themselves such as Pea Pod or Bananasaurus Rex, because leaving these plants alive could possibly be boosting a Potted Powerhouse in the plant hero's hand. If it gets out of hand, try to Bounce this plant or use tricks such as Rocket Science and Locust Swarm. A deadly, disposable zombie, such as Cosmic Imp or Smelly Zombie, will also work.

Retrieved from "https://plantsvszombies.fandom.com/wiki/Potted_Powerhouse?oldid=2321617"
Community content is available under CC-BY-SA unless otherwise noted.