The Potato Mine's weakness is that it can be detonated prematurely by zombies by shooting at it. It takes 30 seconds to recharge one Potato Mine, and the Cactus can hold up to three at a time.

The alternate abilities of this ability are the Potato Nugget Mine, and the Pizzazzling Potato Mine (Garden Warfare 2 only).

Potato Mines force Zombies to look down. If a Zombie sets foot on a Potato Mine, it will explode and they will experience the full force of a "SPUDOW!"

Plant a highly explosive mine.

A good strategy is to hide it in a place that cannot be noticed or to put it near a narrow passage with Tallnut Battlements covering up the rest of the space.

Another strategy often involves putting Potato Mines behind Tallnut Battlements placed in doorways and corridors to block zombie movement. When a zombie destroys the Tallnut, it leaves a dust cloud behind itself which many Cactus players hope will conceal the Potato Mine long enough to make the zombie step on it. This is because most zombie players simply move forward after destroying a Tallnut Battlement, making them susceptible to the above.

One more way is that when you fight a zombie one to one, you might want to place a Potato Mine right in front of the zombie, letting it step on the Potato Mine before the player (or AI) gets to react.

If you are on zombies, there isn't really any way to be signaled when Potato Mines are near. If you are in an area that has been mentioned above, look cautiously, mostly on the ground. If you see a Potato Mine, shoot it from a distance until it is destroyed.

Potato Mine in the tutorial 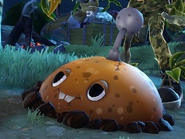 Potato Mine's icon as it appears in Garden Warfare 2 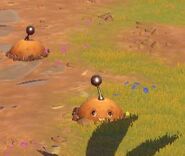 A pair of Potato Mines at a close up

A Potato Mine placed in a bad spot, causing it to tip over
Add a photo to this gallery

Retrieved from "https://plantsvszombies.fandom.com/wiki/Potato_Mine_(Ability)?oldid=2199725"
Community content is available under CC-BY-SA unless otherwise noted.