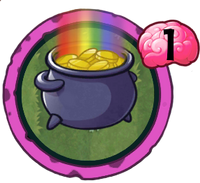 Draw 3 cards.
The luck of the Zombies!
Pot of Gold is a token zombie trick card in Plants vs. Zombies Heroes and a member of the

Brainy class. It is obtained as a card from Leprechaun Imp. It costs 1

to play, and its ability draws 3 cards.

The luck of the Zombies!

compared to 2 cards for 3

) and Telepathy (being usable more than once and drawing more cards for the same cost). However, it is a token card and can only be obtained from Leprechaun Imp. You should use this card to either early game to get a huge card advantage over your opponent or late game when you have almost no cards left to keep yourself in the fight.

However, keep in mind that you cannot block when you have 10 cards in your hand, so it is best to not play this card if you have at least 8 cards in your hand and you are in danger of taking high damage. Certain missions with special gimmicks that involve drawing or Conjuring extra cards, like Peel that Orange!'s boss battle, can get you into this situation much more frequently, so remember to keep count of the cards in your hand.

If you are Rustbolt, you can use Zombology Teacher to help draw three cards from your deck for free, as long as she stays on the field.

Using this card while there is a Dino-Roar zombie such as Mondo Bronto and Stompadon is on the field is a good idea, as they will activate their abilities three times at most.

You can make use of Sportacus and Black-Eyed Pea to help deter your opponent. However, for the latter, you need to be careful of Rocket Science, as your opponent can purposefully boost Black-Eyed Pea to destroy it with Rocket Science. Also, against less experienced opponents, you can trick them into overdrawing, thus being unable to block and allowing huge damage that would otherwise be negated.

If your opponent has any Dino-Roar zombies on the field, it is best to remove them from the field. Otherwise, they will benefit greatly from this trick. 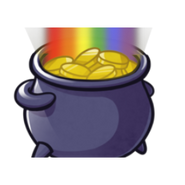 Pot of Gold being played