Plants vs. Zombies Wiki
Register
Don't have an account?
Sign In
Advertisement
in: Night, Night levels, Levels,
and 18 more
English

For other uses, see portal.

As the mini-games special gimmick, there are two pairs of connected portals, which act like environment modifiers. Zombies and projectiles enter portals upon contact, then immediately exit through the other portal identical to the one they entered.

The name "Portal Combat" is a pun based on the video game series Mortal Kombat. The white circular portal is a reference to the latter game series.

It can be also based on the popular game series under the name Portal, given the design of the portals. 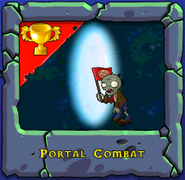 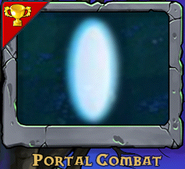 The player should be careful of the portals, but not base their entire defense around them, as they will frequently shift positions. It is a good idea to get a Cactus in every lane as fast as possible, although it is a good idea to save up at least one in the conveyor belt, in case a Balloon Zombie comes in a lane where there is nothing to stop it. Another good idea is to save up the Cherry Bombs whenever they appear and only use them when you have to (e.g. on Football Zombies, or if a portal appears in the back, behind most of the player's plants). Use Torchwoods wisely, as they do not work on Cacti, and place Wall-nuts in front of particularly vulnerable portals. If a portal is too close to the left end of the lawn, try planting Wall-nuts or any other defensive plants to stop the zombies from entering the house. A good idea is to build a solid defense that would work in any level, then watch the portals and be ready to use Cherry Bomb or Wall-nut on zombies in troublesome locations, always keep at least one of each of those plants in your conveyor belt for emergencies.

The Garden Rake may be in front of a portal, causing the zombie to not get killed by it.

A Zombie Yeti in Portal Combat

The beginning of Portal Combat 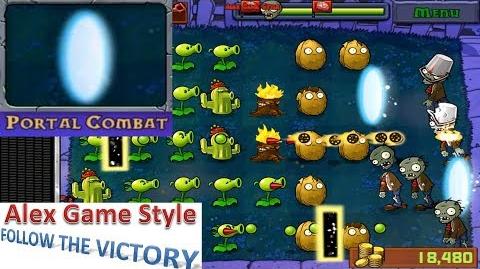