For other versions, see portal.

Portal is an object that appears in Plants vs. Zombies: Garden Warfare 2. It was first seen in the IGN commentary gameplay on Moon Base Z. It is the plants' counterpart of the zombies' teleporter.

Like the teleporter for the zombie team, the portal will allow players to fast-travel to one place to another; however, only plants can use it. It consists of two parts, an entrance which is located near the plants' spawn and an exit which is generated at a pre-determined summoning spot. The portal can only be built from its location; once built, it will stay operational until destroyed (though it can be rebuilt).

The portal, as well as the three Crystal Guardians located near it can only be summoned by the Rose and her variants.

The portals have exactly 500 health.

A plant is about to come out

Icon of a yet to be built portal 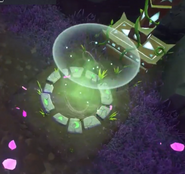 Retrieved from "https://plantsvszombies.fandom.com/wiki/Portal_(PvZ:_GW2)?oldid=2071916"
Community content is available under CC-BY-SA unless otherwise noted.