Greatly increased damage
Turns invincible while burrowing
Health resets if there are no zombies to attack
Pops Cyclops is an elusive plant foe in Plants vs. Zombies: Battle for Neighborville. He can be found in the swamps in Weirding Woods after vanquishing three Dreadroots.

His first name, "Pops," is a slang for father, while "Cyclops" refers to the fact that he only has one eye. The name might also be a pun of "popsicles."

Pops Cyclops is a difficult elusive foe to defeat because he's able to deal about 150 damage if you get hit by his laser beams, which can be fatal for most classes. Also, his health resets if there are no zombies nearby to attack, which can be really irritating especially considering his massive amount of health. Because of these, it's best to use the All-Star to take him down, as he has 200 health and his Dummy Shield ability is extremely handy to absorb his laser attacks, rendering them harmless. Equip the Health Regeneration and Health Regeneration Delay upgrades and go to the swamps near the Z-Tech Factory. Defeat three Dreadroots there and he will eventually spawn. After that, immediately sprint away from the swamps and deploy your Dummy Shield to prevent him from hitting you, then attack him on the eye to deal 20 damage each shot. If the shield breaks, you can safely stand there and he'll be able to survive the hit with around 50 HP remaining, provided that there are no other Dreadroots attacking you. Redeploy your shield once the cooldown ends and keep dealing damage to his eye to defeat him quickly. That way, you can defeat him with very little effort required.

Taking cover behind a Dummy Shield while attacking Pops Cyclops 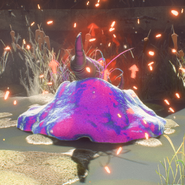