Pops Corn is a Rare variant of Kernel Corn in Plants vs. Zombies: Garden Warfare 2. He is able to zoom in much further than the normal Kernel Corn and can fire fully automatically with his Corn Cracker. He fires in three-round bursts, like the Citrus Cactus. He was first revealed in gameplay showing solo play of Garden Ops.

His name is a portmanteau of popcorn, which are corn kernels that expand and become puffed up from heat, and the term "pops", which is what one calls a father or fatherly figure.

Although he's seen a thing or two, old Pops Corn still has a new trick or two up his sleeve. However, he would kindly appreciate it if you didn't mention that time a family of birds made a nest in his beard.

Pops Corn's primary weapon is the Corn Cracker. It is a 3 round burst shot that deals 8-10 impact and 10-12 critical damage. It has a 36 ammo clip. He is more accurate with slightly more damage than the standard Cob Busters, in turn having a slower rate of fire.

This is effectively the Sniper variant of Kernel Corn and can technically be referred to as the plants' answer to the Super Commando. The increased zoom allows you to attack enemies from longer distances than usual and the Corn Cracker's three-round bursts are fairly accurate, even when rapid-fired. This variant should be treated like a Sun Pharaoh with more offensive strategies, as self-healing options are not present. Use Husk Hop to get up to a vantage point and pick of any zombies that aren't paying attention.

The Pops Corn is not a dedicated Sniper though, as he retains enough close-range power to be an effective assault class. As such, this Sniper-Assault balance can be used in the following way: use your above average zoom and accuracy to pick of any zombies you can reach, then, follow your teammates into the fray, providing support to them by aiding them from a range. The Corn Cracker's behavior means that while you still can support your teammates, more defensive gameplay is recommended than what would be the case for the default Kernel Corn.

As mentioned above, Pops Corn is a long range version of his vanilla counterpart, and is the counterpart to the Super Commando in a lesser sense, but is more comparable to Sun Pharaoh. His shots have more travel time and deal less damage, without the drawback of having to reload after every burst shot. Because of the few times you need to reload, you're better off supporting your allies by picking off threats that your allies need help with such as zombies on the roofs, zombies who are sniping, or tougher zombies in general as you have high damage capability if you can land multiple head shots every time you fire.

Although weaker than the other Kernel Corns, you should treat him as if he were any of the other corns, watch your head and deal with him before he can notice you. Since this variant is more likely to be in the back, he will be difficult to reach in normal circumstances and he will most likely notice you at around the time you notice him, so pick him off as fast as you can before he becomes a problem to you and your allies if you're sniping. Otherwise, get out of his sight line before he can deal any major damage to you. 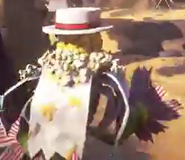 Mastered version of the bobble-head.
Add a photo to this gallery

Retrieved from "https://plantsvszombies.fandom.com/wiki/Pops_Corn?oldid=2023802"
Community content is available under CC-BY-SA unless otherwise noted.