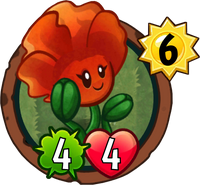 When played: Make Lil' Buddies here and next door.
Makes friends wherever she goes.
Poppin' Poppies is a premium legendary plant card in Plants vs. Zombies Heroes and a member of the

. She does not have any traits, and her ability makes a Lil' Buddy in front of her and the lanes adjacent to her when she is played, but only if those lanes are not fully occupied.

She is based on the poppy, a flowering plant of the family Papaveraceae that is often grown for its colorful flowers.

Her name is a combination of "poppin'," referring to her ability and description, and "poppies," the real-life plant she is based on.

Makes friends wherever she goes.

for 6 sun, Poppin' Poppies isn't very much herself. Instead, her ability is arguably the more powerful part of her, allowing her to function as an good defensive card. You can stall the zombies to give your plants an extra turn to attack freely, protect yourself when there are many vulnerable spots in your defenses, or set up some defenses to pressure your opponent when the field is empty. And not only that, Lil' Buddy heals you for 2 health each, essentially making Poppin' Poppies a good clutch card too; healing for 6 (maximum) is no joke, especially when you are able to easily build a defensive setup with your Guardian plants. But perhaps the best part her ability is that you do not have to spend any cards to make the Lil' Buddies, which is especially beneficial for a class that lacks card draw by itself.

Poppin' Poppies is also good for synergy, but just like her viability in combat, it also relies heavily on the Lil' Buddies she makes. For synergies in the Guardian class, the most viable ones would be with Three-Nut (but not Spineapple and Loco Coco since you will need at least a lot of sun to execute the combo in one turn) to strengthen the Lil' Buddies and Force Field to make Lil' Buddy invincible (with the added bonus of persisting even after Lil' Buddy is destroyed). As for synergies in other classes:

A late-game control deck is ideal with Poppin' Poppies, as she cannot make that much of an impact herself; while she (her Lil' Buddies, to be precise) does heal you for a decent amount of health, it means nothing if your opponent's zombies are hurting more than she can heal.

Poppin' Poppies' weakness would be zombies that are able to attack multiple targets in one turn of combat, as the Lil' Buddies can only block one attack before going down (unless boosted, which isn't worth it unless you use The Red Plant-It) Such examples include zombies with bonus attack abilities like Electrician and Gargantuar Mime, as well as

Strikethrough zombies. Fortunately, for the second example, all you need to stop them is to play a plant that can destroy it in one attack.

Neither Poppin' Poppies nor her Lil' Buddies excel in terms of stats, but they will buy your opponent a turn to strengthen their defenses. It is recommended to use zombies that either do bonus attacks or have the

Strikethrough trait so that they can destroy the Lil' Buddy fronting them and do damage to whatever it is guarding. If you want to play tricks, play area of effect tricks like The Chickening or Weed Spray (and Zombot Stomp, although it is less effective than the aforementioned two) to remove the Lil' Buddies and do damage to (or remove for Zombot Stomp) Poppin' Poppies. If you don't have any, focus on harming Poppin' Poppies with cards like Rocket Science and Cakesplosion as she can still make a dent in your defenses. If you fear your opponent has this card, use Sneezing Zombie to prevent the healing, although your opponent can still use them in a defensive matter.

Do not Bounce Poppin' Poppies unless she is causing major trouble, as it will allow your opponent to make more Lil' Buddies, resulting in more obstacles for you to break through and your opponent healing off even more health.