Popcorn was a plant in Plants vs. Zombies Adventures. He exploded on contact with zombies, but he took time to arm, making him similar to Potato Mine. Popcorn was unlocked after completing level 8 of Cadaver Cavern. He was added in the August 8th update.

This plant is based on the kernel of the maize (Zea maize) subspecies of the same name (Zea maize everta).

Popcorn is a bit of a nervous nelly. He takes his sweet time to get prepped for zombie fightin’. But when it’s time for his moment in the spotlight, he goes to pieces in all the excitement. It’s okay, Popcorn! You’re doing a great job! 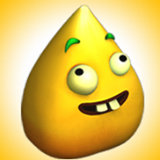 Popcorn popping and killing a zombie