None
Not actually a shark.
Pool Shark is a premium uncommon zombie card in Plants vs. Zombies Heroes and a member of the

Bullseye trait and does not have any abilities.

He is based on the term "pool shark," which is slang for someone who is a particularly good player of the game billiards, also known as pool. His description is a play on said term, emphasizing the word "shark."

Not actually a shark.

Pool Shark has pretty good strength for a 2-brain zombie. What makes this zombie shine even more is his

Bullseye trait. However, he has very low health, and since plants go second, it can be rather hard to land a hit with Pool Shark.

A recommended strategy is to use him with Teleport, as your opponent has limited options to prevent it, especially in the early game. This allows Pool Shark to land 3 free damage on your opponent without any harm for the cost of 3 brains. Beware when playing against

Smarty heroes, however, as they have access to Brainana, which can prevent the use of Teleport entirely.

Pool Shark is also a sports zombie, which means he can be useful in a Rustbolt deck based around them, since Team Mascot can boost his stats and Zombie Coach can protect him from incoming damage by shielding him, not to mention Rock Wall and Camel Crossing, both of which boost Pool Shark's survivability. Immorticia can boost Pool Shark to be even more threatening with tricks such as Vitamin Z. Finally, Super Brainz can play Smoke Bomb or Carried Away to move Pool Shark to an unoccupied lane to do extra damage to his opponent.

While having 3 strength, which is a lot in the early game, this zombie usually fails to survive for long due to his low amount of health. Using almost any damaging plant or trick will destroy this zombie. However, in the early game, most plants will be destroyed in the process. Also, beware of bonus attack and moving cards, as they can give Pool Shark the upper hand. You might want to use Wing-Nut to stop him from doing a bonus attack, but the chances of using this method is low as Wing-Nut can only be played on turn 4 and by the time it is played, he will be most likely destroyed or not played again. 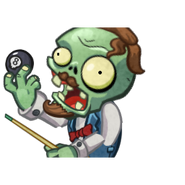 Pool Shark tinted gray due to a glitch