Plants vs. Zombies Wiki
Register
Don't have an account?
Sign In
Advertisement
in: China exclusive, Archived, Plants,
and 11 more
English

Qin Shi Huang Mausoleum - Level 4-1
The seeds lobbed by Pomegranate-pult are powerful, and will do bonus damage to the zombies' armor and helmets.
Pomegranate-pult (石榴; pinyin: shíliú) was a plant in Plants vs. Zombies Online. It was very similar to Cabbage-pult. It lobbed pomegranate seeds at zombies every 2.85-3 seconds, and did extra damage to armored zombies such as Conehead Zombie, Buckethead Zombie, and similar zombies.

Its name, along with its projectile, is based on the Punica granatum.

Its name is a portmanteau of "Pomegranate," the real-life plant this plant is based on and "catapult," referring to how it attacks.

When given Plant Food, it launched five large pomegranate seeds at five random zombies on the screen.

Zombies which get hit are slowed down by 1 second

Sun cost is reduced into 150 sun

The pomegranate seeds deal a large amount of damage against armored zombies, just like Magic Vine's plasma balls. Usually, it is good to use it as a support plant, as its damage is the same as a Cabbage-pult's if the zombie does not have armor. 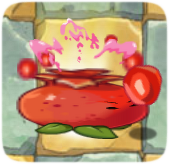 It looking at the player

Pomegranate pult next to Magic Vine in Normal Mode 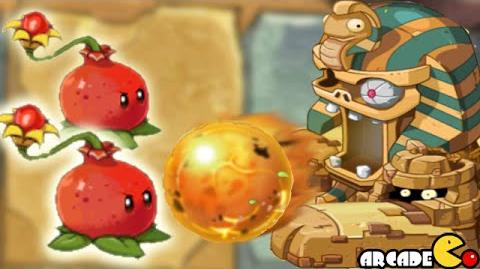