For the similar plant in Plants vs. Zombies 2, see Shadow-shroom. 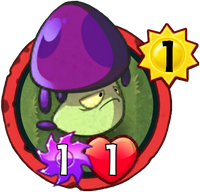 None
"Zombie Heroes. Don't like 'em. Not one bit. Don't care who knows it, either."
Poison Mushroom is a premium uncommon plant card in Plants vs. Zombies Heroes and a member of the

Kabloom class. They can also be made by Mush-Boom. They cost 1

Anti-Hero 2 trait and do not have any abilities. Their closest zombie counterpart is Mini-Ninja.

It is based on many Inkcap mushrooms from the genera Coprinus, Coprinellus and Coprinopsis, which are known for the black ink-like substance secreted from the bottoms of their mushroom caps.

Their name is a combination of "poison," referring to their appearance, and "mushroom," the real-life fungus they are based on.

Their description may be a reference to one or more of the quotes found in The Dark Knight. One of the quotes in the film includes Batman having a conversation to James Gordon on whether the latter must choose to be a hero or a villain, and the other quote was partially mentioned by The Joker where the dialogue says "Not. One. Bit." It is also a reference to their

"Zombie Heroes. Don't like 'em. Not one bit. Don't care who knows it, either."

Poison Mushroom is a good early-game plant when you want to lead with heavy damage to your opponent, but they have to land a hit on them, because otherwise, they are no better than Button Mushroom. The best placement for them would be a lane with no zombies, but you have to beware when when your opponent does not play any zombies at all, because they may be saving up for a trick to destroy them.

Being a mushroom card, Poison Mushroom can be boosted by Buff-Shroom, while Punish-Shroom will punish your opponent if they recklessly destroy them. Poison Mushroom also fits with mushroom synergy in general due to them being a cheap swarming card.

Poison Mushroom should not be a threat as long as they do not hit you. Unfortunately, that is easier said then done, as your opponent will most likely play Poison Mushroom on an empty lane. However, there are several cards that counter them very well. Tricks like Bungee Plumber and Nibble are such examples. Dog Walker is another, as he will move onto Poison Mushroom's lane, preventing them from hurting you. It also helps that Dog Walker is able to destroy Poison Mushroom in one attack and survive. However, there is also a chance that your opponent will exploit their Hunt trait instead. Slammin' Smackdown is a perfect solution, though this is only restricted to The Smash unless you get lucky with Thinking Cap and Quazard.