For the version in Plants vs. Zombies Heroes, see Pogo Bouncer.

Pogo Zombie is a vaulting zombie in Plants vs. Zombies that jumps over multiple plants. He is the 19th zombie encountered in Adventure Mode. Tall-nuts can prevent these zombies from jumping over, and Magnet-shrooms will steal their pogo sticks.

The sound when a Pogo Zombie jumps using his pogo stick.

Split Pea, Starfruit, Squash, Chomper, and Gloom-shroom are also useful against Pogo Zombie, as Split Pea and Starfruit shoot behind themselves after Pogo Zombie jumps over them and two Gloom-shrooms deal enough damage to kill them while the zombies are attempting to jump. Squashes and Chompers can kill this zombie too, but Chompers will only work if the pogo stick is removed. This can be more effective than Tall-nuts or Magnet-shrooms, as Magnet-shrooms must recharge before being used again, and Tall-nuts will be eaten after enough zombies bite it. When Pogo Zombies lose their pogo stick, their movement will be very similar to a regular Zombie. However, they move slightly faster than a normal zombie would walk, approximately the same as a Flag Zombie.

Chompers will attempt to eat Pogo Zombie if he has his pogo stick, but the Pogo Zombie is able to jump first. However, it causes a glitch where the Chomper eats a zombie behind itself (though occasionally it messes up and does not eat said zombie).

Note that Kernel-pult's butter does not stop a Pogo Zombie if he is on his pogo stick, but it will still damage him normally.

Pogo Party is a mini-game set on the Roof where there are a lot of Pogo Zombies that the player will have to defeat. Due to the difficulty, there is an extended preparation time (the time before the first zombie comes). You will probably need Tall-nuts and Imitater Tall-nuts, and possibly Squash and Jalapeno, but just use a regular roof level strategy aside from that.

A Pogo Zombie without his arm

Frozen Pogo Zombie without his arm

A Pogo Zombie without his stick

A Pogo Zombie without his arm and his stick

Pogo Zombie's head, he will lose his glasses after being killed

A Pogo Zombie's pogo stick being stolen by the Magnet-shroom 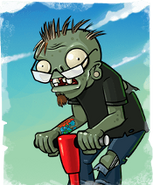 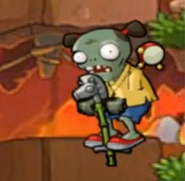 Pogo Zombie skips the brain if it still has the pogo stick.
Add a photo to this gallery

Retrieved from "https://plantsvszombies.fandom.com/wiki/Pogo_Zombie?oldid=2360238"
Community content is available under CC-BY-SA unless otherwise noted.