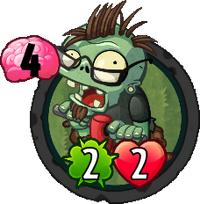 For the version in Plants vs. Zombies, see Pogo Zombie.

When revealed: Bounce a Plant.
Not the most efficient mode of transportation, but definitely the most fun.
Pogo Bouncer is a premium super-rare zombie card in Plants vs. Zombies Heroes and a member of the

. He has the Gravestone trait, and his ability gives a selected plant the Bounce effect when he is revealed. His closest plant counterpart is Jumping Bean.

He is based on the zombie in Plants vs. Zombies with a similar appearance.

Not the most efficient mode of transportation, but definitely the most fun.

Just like Backyard Bounce, Pogo Bouncer can be used to remove dangerous or expensive plants cheaply for just a turn, or clear the way for other zombies so that they can hit your opponent. While he is slightly more expensive than Backyard Bounce, Pogo Bouncer leaves a zombie behind, can have his ability reused by In-Crypted/Mixed-Up Gravedigger/Firefighter/Secret Agent, or be boosted by Headstone Carver and Team Mascot.

He is vulnerable to anti-gravestone cards like Grave Buster, and in Super Brainz' or Huge-Gigantacus' trick decks, you would definitely consider backyard bounce instead.

As Neptuna, you could use Team Mascot and Zombie Coach to protect and boost Pogo Bouncer since he is a sports zombie, but even then, you should not expect him to do much due to his low base stats. However, he is a good sports zombie for Chum Champion's Evolution thanks to his Gravestone trait and plant-clearing ability, since it would allow him to easily survive the Plants Play phase before combat against non-

Smarty heroes, and he can even clear a plant for Chum Champion to make a bigger impact.

It is not recommended to use this if Jelly Bean is on the field, unless you are Bouncing Jelly Bean itself.

Aside from anti-gravestone cards, there are not many counters to Pogo Bouncer. When he Bounces a plant, you'll have to wait for the next turn to play it again, and it may cost you some tempo if the plant is expensive. Try to swarm the field with equally strong plants to minimize the impact of the ability. Some cards like Magic Beanstalk benefit from being Bounced due to them having a "When played" ability, so you still get some benefit even if they are Bounced. Jelly Bean can also discourage you from bouncing something that might be more important, but beware if the zombie hero targets it directly instead.