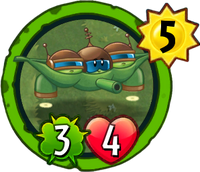 This does a Bonus Attack when you play a Plant here or next door.
They're just trying to create peas in our time.
Pod Fighter is a galactic super-rare plant card in Plants vs. Zombies Heroes and a member of the

. They do not have any traits, and their ability makes them do a bonus attack every time a plant is played on their lane or the lanes adjacent to them.

They're just trying to create peas in our time.

While their stats are not the best for their cost, Pod Fighter's ability is what makes them shine. This will allow them to perform bonus attacks just by playing other plants on their lane or next to them. Because of this, Party Thyme synergizes with this, drawing a card for each plant that is played. Being a pea plant, try to make use of The Podfather and Torchwood to increase their strength, although as mentioned before, Pod Fighter is also able to fit in non-pea decks due to their ability.

Captain Combustible has probably the best use of Pod Fighter's ability, as not only does he have a multitude of cheap plants like Shroom for Two, these plants can easily be destroyed thanks to their low health (which allows other plants to be played there), allowing you to play more plants in a shorter span of time. Mushroom Grotto and Pair Pearadise also work greatly with Pod Fighter. Chompzilla can make use of Pod Fighter's ability to her advantage by playing them in Venus Flytraplanet, allowing her to heal herself every time they do a bonus attack. She can even have them on or next to the lane with Solar Winds, which will make them do a bonus attack if that lane is unoccupied by a zombie at the end of the turn. Grass Knuckles has an arsenal of Team-Up Plants, making the Pod Fighter deal more damage. He also has access to Poppin' Poppies and Wall-Nut Bowling, enabling the Pod Fighter to do up to 3 Bonus Attacks at once.

This card can be problematic despite their weak stats due to the potential for lots of synergy. The best way to get rid of them is to use tricks that can destroy them such as Cakesplosion, Locust Swarm, and Slammin' Smackdown. Don't hesitate to make use of tricks and environments as well, as they can help you destroy this more easily. Another way to prevent them from doing much damage is to play Gravestone zombies in front of them because the gravestone would be able to absorb the bonus attacks. You can also use Bonus Track Buckethead to downright prevent them from doing bonus attacks or Gargantuar Mime so he can do a bonus attack, considering that they are not in the mime tribe.

Pod Fighter on the field

Pod Fighter destroyed
Add a photo to this gallery

Pod Fighter being the featured card in the menu for the June 21st, 2017 Daily Challenge

Pod Fighter with the

Double Strike trait
Add a photo to this gallery

Retrieved from "https://plantsvszombies.fandom.com/wiki/Pod_Fighter?oldid=2321618"
Community content is available under CC-BY-SA unless otherwise noted.