Super Rare
The Plumber Zombie brings the tools of his trade to the fight, capable of launching his explosive plungers with amazing accuracy. He can also unclog Outhouse Zombies when needed.

Super Rare
The Plumber Zombie brings the tools of his trade to the fight, capable of launching his explosive plungers with amazing accuracy. He can also unclog Outhouse Zombies when needed.
Plumber is a Super Rare variant of the Engineer in Plants vs. Zombies: Garden Warfare and a Rare variant in Plants vs. Zombies: Garden Warfare 2. His difference from other Engineer variants is that his weapon has larger splash damage at the cost of less ammo per clip.

The Plumber Zombie brings the tools of his trade to the fight, capable of launching his explosive plungers with amazing accuracy. He can also unclog Outhouse Zombies when needed.

His primary weapon is the Plunge Shot. The facts below apply to a fully upgraded weapon.

Zomboss figured out a better way to stack plungers resulting in an ammo capacity increase.

By enhancing the de-clogging mod a side effect was that each plunger now deals more damage.

Stun multiple plants with Sonic Grenades/Proximity Sonic Mines to make him even more effective. Plumber functions similar to Peashooter, but with more splash damage, less ammo, and a longer reload time. He can be effective when there are plants next to each other or where the map is smaller to travel around, such as Zomboss Estate. Using the Jackhammer can also make the Plumber effective.

The Plumber can be helpful in Gardens & Graveyards, Gnome Bomb, and Suburbination. For G&G, there will be plants defending the garden. If you are lucky, multiple plants will be there, allowing you to deal splash damage to most of them. In Gnome Bomb, plants will defend their scarecrow, maximizing the effectiveness of the Plumber. He can also damage or vanquish plants carrying the bomb and any plants near them.

The Plunge Shot maximizes its effectiveness when multiple plants try to defuse a bomb, but be careful as they might eventually succeed. In Suburbination, plants will defend the gardens like in Gardens & Graveyards. The same strategies apply there.

The Plunge Shot does not have infinite range, unlike some zombies such as Foot Soldiers, so Sunflowers and Peashooters can use their Sunbeams, Solar Flare Beams, Pea Gatlings, and Retro Gatlings, respectively, to take out him out from a distance. In most cases, he can be a pain, mainly in the most effective scenarios listed above. Try to dodge any Sonic Grenades and avoid Proximity Sonic Mines to decrease the effectiveness of the Plunge Shot if he can see you. Bunching up with other teammates is ill-advised due to his wide splash damage radius.

If you are a Cactus, the best way is to snipe him from somewhere if he does not see you. If you are a Chomper, the best way to defeat him is to use the Goop to slow him down and possibly chomp him from behind. Using the Garlic Drone also works, but the Plumber might destroy your drone before you make a difference. Luckily, you can move around a lot, as he has a slow rate of fire. Using Burrow to hide from the Plumber can also work, but Sonic Grenades/Proximity Sonic Mines can stun you, forcing you to come out of the ground and being unable to attack, maximizing the effectiveness of the Plumber. Spikeweeds and Spiky Spikeweeds can also work if he is not looking.

Chompers are the worst at fighting Plumbers, along with the Sunflower. If you are a Peashooter, use your Chili Bean Bomb/Sombrero Bean Bomb to try to defeat him. Use Hyper to avoid his shots, but they will still deal splash damage if he misses you. However, this only happens if you are near teammates, a wall, or a vehicle. 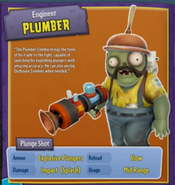 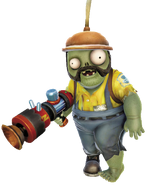 The Plumber wearing the Lumberjack set on his Jackhammer

Concept art for Plumber with Scientist, Astronaut, and Super Commando 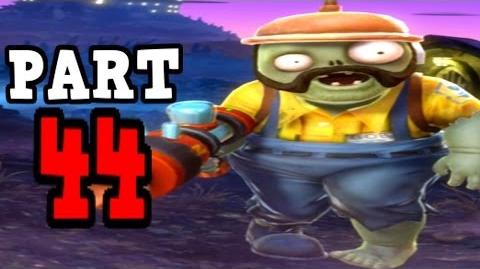