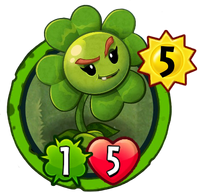 When played: Conjure an Event card. Plucky Clover gets +

equal to that card's cost.
She's a giver, no doubt. But she feels like she gets a lot out of it too.

For other uses, see Blover (disambiguation).

Plucky Clover is an event plant card in Plants vs. Zombies Heroes, and a member of the

. She does not have any traits, and her abilities Conjure a random event card, and give her the amount of strength equal to that card's cost.

She was introduced in update 1.12.6, along with Shamrocket, Electric Blueberry, Spyris, Leprechaun Imp, and Bonus Track Buckethead. She became craftable as of update 1.16.10.

She was made available in the Luck o' the Zombie event. She was available from 14 March 2017 to 21 March 2017. Players could also buy a Time Travel pack with this card from the 28th of February to the 6th of March.

She is based on the four-leaf clover, commonly nicknamed the Lucky Clover.

Her name is a portmanteau of "plucky," to have or show determined courage in the face of difficulty, and "lucky clover," the real-life plant she is based on.

Her description is a reference to her ability.

She's a giver, no doubt. But she feels like she gets a lot out of it too.

Plucky Clover's stats aren't great (only being slightly above average even if you get the most expensive event card, being Toadstool or Sap-Fling), but her main purpose is to surprise your opponent with an event card. But even then, she is a very luck-based plant to use. While event cards have their own uses, most will either be insignificant or short-lived by turns 5 and on, examples being Hot Date, Jack O' Lantern, and Blooming Heart. She can give you event cards like Toadstool and Electric Blueberry instead, but the chances of that are lower than the former.

Plucky Clover can be a choice with Dino-Roar plants due to her giving you a card, although Plucky Clover is used for variety rather than efficiency, so she isn't the best option. As Green Shadow, you can use Rescue Radish to replay her and draw another event card, but Plucky Clover is very expensive and has a highly situational ability, so it isn't really recommended to try this.

A minor thing to note is that Plucky Clover actually benefits from Defensive End's ability, as it gives Plucky Clover extra strength if Shamrocket is drawn, which gives her +5

. But since Shamrocket is the only instance of this tip being useful, keeping any Defensive Ends alive is not worth it in any way. On the other hand, Plucky Clover synergizes negatively with Captain Cucumber, as his ability lowers the amount of strength Plucky Clover gains. Still, reducing a plant's cost by 1 sun may prove more useful than a mere +1

To conclude, Plucky Clover does not do very well in a full competitive standpoint due to her high cost and mediocre (and even disappointing in many cases) Conjuring ability. She may have a place in terms of Dino-Roar abilities, RNG decks, or even leafy decks, but it is best not to use her as your main offense or defense in any deck.

Also, do not play this when there is a Quickdraw Con Man on the field, as he will deal 1 unblockable damage to you once she Conjures a card.

Plucky Clover can either be a threat or not, depending on her strength. You can guess what your opponent has Conjured by the amount of strength Plucky Clover gains, which can be useful in certain situations.

If Plucky Clover gets too much strength, you should pack some removal cards to get rid of her, the most efficient example being Rocket Science. You could play something like Rolling Stone if Plucky Clover gains little strength, but keeping Plucky Clover alive may be more useful for you in this case, since she will clog up space so that stronger plants can't be played there.

It is not the best option to Bounce Plucky Clover since it might put your opponent ahead of you in terms of card advantage, exceptions being when she will either defeat or severely damage you, or if she is blocking a hard-hitting zombie. Still, it isn't the worst option due to Plucky Clover being such an expensive card, hurting your opponent's tempo a lot.

You can also have Quickdraw Con Man on the field to make the opponent think twice before playing her, as he can deal 1 unblockable damage to the plant hero instantly once she Conjures a card.

Retrieved from "https://plantsvszombies.fandom.com/wiki/Plucky_Clover?oldid=2282881"
Community content is available under CC-BY-SA unless otherwise noted.