The Player's Town was the player's home in Plants vs. Zombies Adventures, which consisted of multiple lots that were to be reclaimed from the zombies. Zombies occasionally attacked the player's town, which had a 30-second delay for preparing. The player was armed with various kinds of plants for protecting their buildings. Additional buildings could be built for extra Zombucks or other items. The player could use decorations and paths to decorate their towns.

Ah, home, sweet home. It’s so nice and comfortable… if only you didn’t have that pesky zombie problem! What plants will you use to defend your house?

Lots were different parts of the town. Before they were unlocked, they were covered in fog. The player would have to obtain a certain item, almost always at the end of a map stage.

Note: The player would obtain a new plant after they reclaimed a new lot.

Zombie Paradises were locations which surround the Player's Town, and supposedly included multiple zombies. These lots were never officially released before the game shut down, and therefore, they could never be played, nor reclaimed.

Zombie Sneak Attacks happened at random, caused by either the server or a Facebook friend, in which zombies attacked a lot. If the player successfully defeated the zombies, they would be rewarded with Zombucks. However, if the zombies got into one of the lot's buildings, that building would stop producing coins, and the player would have to repair it in order to make it produce coins again.

Many townspeople and characters such as Crazy Dave and Matilda always walked around the player's town. When they were clicked, they will say some tips or just sample sentences. 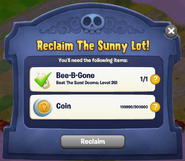 The zombies' attack is coming, with townspeople running in fear

The Workshop Lot after it has been reclaimed

The Car Lot after it has been reclaimed

The Post Office Lot after it has been reclaimed

The Cafe Lot after it has been reclaimed

Please follow the Project:User uploads rules if you decide to upload your town.