For the free version of the game available for iOS, see Plants vs. Zombies FREE.

However the game can still be played if you are using a device with the game still installed on it or if you download it off a family member using family sharing. While 32-bit apps cannot be downloaded or played on IOS 11 or later, this app can be played still due to 64-bit support updates prior to discontinuation. 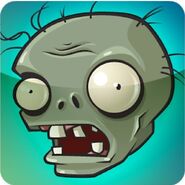 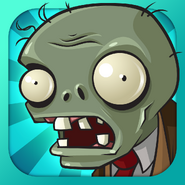 There are many noticeable differences.

For one, the seed packets are on the left of the screen instead of the top. They do not show the name "Bloom and Doom Seed Co."  The zombies' heads are slightly bigger, but their design is different.

Buttered Popcorn is a mini-game exclusive to this version. The menus and backgrounds have a new graphical design, due to the game graphics being redone for Retina Display.

The player can only buy nine seed slots, much like the Nintendo DS version. All the plants and zombies are in HD, giving them a new look. The player can buy all or some of the mini-games with coins (iPhone and iPad respectively). On a related note, the currency is called "Coins", rather than "Money".

There is no Tree of Wisdom. Tree Food is replaced with four different Mystery Sprouts for the Zen Garden. The tenth seed slot is replaced with bacon. Killing zombies increases the player's pile of zombies. Last Stand was changed into a Puzzle collection; however, the mini-game version still exists.

There is now a Quick Play mode, allowing the player to play old adventure levels at any time. The player gets the Crazy Dave's Twiddydinkies earlier in the game (Level 2-2) to buy mini-games, so Level 3-4 gives the player bacon, which Crazy Dave trades for $1000.

Every December, Festive Mode can be enabled. When enabled, some regular Zombies, Flag Zombies, Screen Door Zombies, and Ducky Tube Zombies (regular and flag versions) wear a Santa hat on top of their heads.

Get ready to soil your plants as a mob of fun-loving zombies is about to invade your home. Use your arsenal of 49 zombie-zapping plants — peashooters, wall-nuts, cherry bombs and more — to mulchify 26 types of zombies before they break down your door.

WINNER OF OVER 30 GAME OF THE YEAR AWARDS*

Plants vs. Zombies™ was spawned from the fertile minds that created Bejeweled®, Peggle®, Zuma® and Bookworm®.

50 FUN-DEAD LEVELS
Conquer all 50 levels of Adventure mode — through day, night, fog, in a swimming pool, on the rooftop and more! Replay levels in the all-new Quick Play arena.

NOT YOUR GARDEN-VARIETY GHOULS
Battle zombie Pole-Vaulters, snorkelers, Bucketheads and more. Each has its own special skills, so you'll need to think fast and plant faster to combat them all.

SMASHING FUN
Try to survive all 9 unique levels as you battle zombies hiding in vases. It's smashing fun!

SMARTER THAN YOUR AVERAGE ZOMBIE
Be careful how you use your limited supply of greens and seeds. Zombies love brains so much they'll jump, run, dance, swim and even eat plants to get into your house.

GROW WITH YOUR GAME
Earn 44 awesome achievements and show off your zombie-zapping prowess.

Get ready to soil your plants in this high-definition, multi-touch adaptation of the PopCap hit! Winner of over 30 Game of the Year awards.* Plants vs. Zombies™ was spawned from the fertile minds that created Bejeweled®, Peggle®, Zuma® and Bookworm®.

WINNER OF OVER 30 GAME OF THE YEAR AWARDS*


A mob of fun-loving zombies is about to invade your home. Defend it with an arsenal of 49 zombie-zapping plants that will slow down, confuse and mulchify all 26 types of zombies before they reach your door.

MULTIPLE FUN-DEAD GAME MODES
Conquer all 50 levels of Adventure mode. Take on Mini-Games and the ultra-challenging Survival mode. Replay your favorite levels with Quick Play. Relax and start a plant collection in Zen Garden. And take on Vasebreaker Endless and I, Zombie Endless.

NOT YOUR GARDEN-VARIETY GHOULS
Battle 26 kinds of zombies: pole-vaulters, snorkelers, bucketheads and more. Each has its own special skills, so you'll need to think fast and plant faster to combat them all.

SMARTER THAN YOUR AVERAGE ZOMBIE
Be careful how you use your limited supply of greens and seeds. As you battle the fun-dead, obstacles like a setting sun, creeping fog and a swimming pool add to the challenge.

BONE UP
Unlock the Almanac for the full story on your plants and your zombie foes.

GROW WITH YOUR GAME
Earn 45 special achievements and show off your zombie-zapping prowess.

These achievements were originally intended for this version, but were removed. They are still hidden in the coding for the game.

Advertisement for the iPhone version 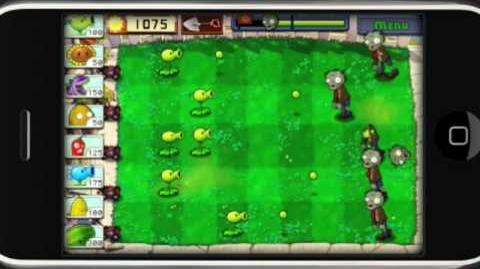 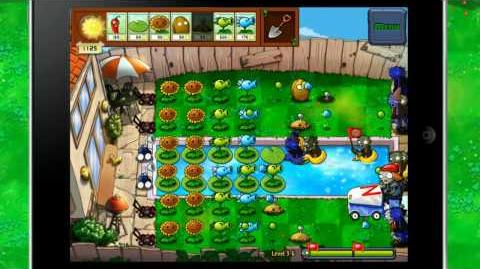