Plants vs. Zombies Web Version is a free online Adobe Flash version of the game that was available at the PopCap Games official website and Pogo.com. There are three modes: Adventure Mode, Survival and Puzzle. In the Adventure Mode of this version, the player can only progress until they finish level 2-4 (level 2-2 in the Pogo version) before they must start again as a new player. However, if one unlocked the Survival and Puzzle modes on one computer previously, they will be able to continue playing those modes. Survival Mode on the web version is a modified version of Survival: Endless which takes place during the night, and the player can only choose four plants at a time. Puzzle Mode consists of a modified version of Vasebreaker. The player's progress will be lost on the Survival and Puzzle modes if you quit.

As of September 1, 2018, the game is no longer playable on the PopCap website, and was removed from Pogo on December 1, 2020 due to the discontinuation of Flash. The game was still playable on unofficial reuploads of the game's SWF file, such as on 4399 and MSN Games, until January 12th, 2021, which is when Flash was officially blocked from running on the internet. The game is still available on BlueMaxima's Flashpoint. (However, some Chinese browsers still has flash installed due to Flash's popularity in China. )

Zombies are invading your home, and the only defense is your arsenal of plants!

In this free online version of Plants vs. Zombies, you're armed with 11 zombie-zapping plants like peashooters and cherry bombs. You'll need to think fast and plant faster to stop 5 different types of zombies dead in their tracks.

Plants vs. Zombies is a Flash-powered game that can only be played on Pogo Classic. It will be retiring later this year due to changing web technologies.

There were 13 plants usable (only 11 in the Pogo version) in the Adventure Mode of the web version on PopCap's site, 12 of which are obtainable:

* = Only available in the online version on PopCap's site.

There are 8 zombies in the web version.

There are 14 Adventure Mode levels in the web version.

* = Only available in the online version on PopCap's site.

On the Pogo page for the game, there are 8 different challenges. All of them require to reach a obtain or reach a certain amount of something, such as sun collected or zombies defeated. Each challenge resets after a week and your progress towards the challenges will reset, letting you complete the challenge again that week. Completing each challenge for the first time will reward you with a badge on your Pogo profile and a chat icon. A Club Pogo membership is required to unlock the challenges.

Star Power
Add a photo to this gallery

Star Power
Add a photo to this gallery

By downloading the necessary game files from the website hosting the game, and saving them all in one place, with the right file structure, one can use an offline flash player to play the "pvz.swf" (or similarly labeled) file. By using an SWF (Shockwave Flash) decompiler, one can edit the code within "pvz.swf" to make plants deal instant kill damage, be invulnerable, shoot different projectiles (i.e. Puff-Shroom shooting peas) and Chomper can be made to eat and swallow zombies instantaneously. By editing "resources.swf", one can change the appearance of plants, zombies and other objects in the game. In data.xml, editing the use of in-built cheats from "false" to "true" allows you to change the speed of the game, the recharge speed of plants, whether you want sun to not be needed to plant a seed and lets you spawn any zombie in the game.

In the same 4399 website, there's a version of the game that lets you hack it. Here are the codes:

NOTE: When spawning zombies, they will appear in random lanes. In levels 1-1, 1-2, or 1-3, the zombies can appear on the unsodded lanes.

According to tcrf, this is a hidden debug and cheating function.

On the Pogo homepage

Another Try the Full Version screen.

No zombies' bone can be seen in the online version 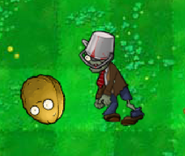 Buckethead Zombies will have the damaged bucket under the normal one in Wall-nut Bowling after being hit once. 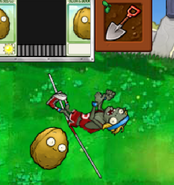 The game is still available on Flashpoint. Note this also allows you to hack the game, using the same cheats as on 4399.

A glitch which somehow made it to be level 2-7, however the lose music sound keeps looping and nothing happens when adventure button is attempted to click
Add a photo to this gallery

Retrieved from "https://plantsvszombies.fandom.com/wiki/Plants_vs._Zombies_Web_Version?oldid=2364844"
Community content is available under CC-BY-SA unless otherwise noted.