View source
watch 01:11
Plants vs. Zombies: Heroes Animated Trailer
Do you like this video?
Play Sound

Plants vs. Zombies Heroes (abbreviated as PvZH or PvZ Heroes) is a collectible mobile card game announced on March 10, 2016, through PopCap Games' official YouTube channel and soft released in certain countries on the same day. On October 18, 2016, the game was released worldwide (except China) on iOS and Android.

It's the lawn of a new battle! Plants vs. Zombies: Heroes mobile lets you collect and choose from hundreds of characters across the PvZ Universe in this epic collectible card game that takes you beyond the backyard.

For the first time ever on mobile, play as either plants or zombies and unlock their lawn-inspiring super powers. Collect hundreds of characters, including new roster favorites from Plants vs. Zombies: Garden Warfare 2 like Super Brainz, Z-Mech, Citron, and Rose, and adventure through an all new PvZ Universe with a unique, comic-style narrative. Pick your favorite hero, assemble your team, and use your heroic skills to outwit your opponents in battle.

Battle and adventure by yourself against AI in the single player campaign, or battle against other players in real-time multiplayer! Challenge your friends or test your powers and strategy against the rest of the world in casual or ranked multiplayer battles – all in real time. Complete Daily Quests to earn rewards to expand your roster of Heroes and sidekicks.

In adventure mode, lead your favorite plant and zombies on epic missions to battle and take down all opposing Heroes across locations as zany and diverse as the Heroes who inhabit them. Experience the story of Plants vs. Zombies: Heroes via comic-styled story sequences revealed as your adventure progresses. Use the adventure mode to tone your skills and fine-tune your strategy, experimenting with different heroes and powerful teammate combinations along the way. 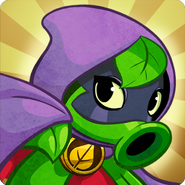 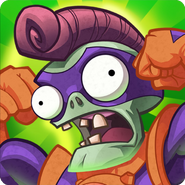 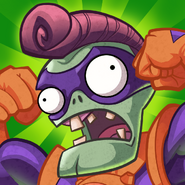 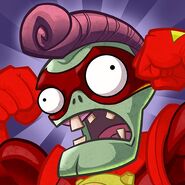 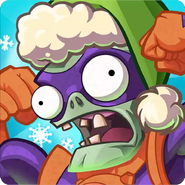 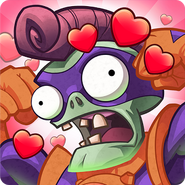 The icon used during 1.10.22 update, only used on the Google Play store

Each day, the plants and zombies battle as usual. After several zombies have been destroyed, Dr. Zomboss suddenly appears in his brand new Zombot Hero-Tron 5000, and uses the Zombot's hero laser to transform a basic zombie into a hero called Super Brainz. Dr. Zomboss is so ecstatic that he ends up accidentally pressing a button that says "Do Not Push!" The Zombot malfunctions, resulting in the hero laser transforming a nearby Sunflower, Wall-nut, Bonk Choy, and Peashooter into their respective heroes, Solar Flare, Wall-Knight, Grass Knuckles, and Green Shadow. Then the Zombot explodes, and the hero laser transforms several other plants and zombies around the world into heroes. Now the battle fully begins, as both sides are going to gather all heroes in the world to be the victor.

While Beta-Carrotina was chasing Huge-Gigantacus, Meteor Z crashes into Earth, deep enough to where they end up in a luscious world known as Hollow Earth, where time has stopped to the point where all of the plants and zombies are prehistoric. Said plants and zombies end up being released to the surface after the crashing of Meteor Z.

On this game it is possible to play as both plants and zombies, with the main game modes being:

Check this page to find the various glitches of this game.

Check this article to see concept art and unused content of the game. Unfortunately, there is no upcoming content for now.

Before 2019, this game used to regularly get updates that can bring exciting new content or bug fixes. Check this page to see the various updates to this game and when they were released.

The main objective of the game is to defeat the opposing hero by reducing their health to 0 (or by letting your opponent run out of cards to draw). This is done via the cards played on the field. There are three types of cards: fighters (plants/zombies), tricks, and environments.

During a game, each turn has four phases.

At the start of each turn, the number of sun/brains given increases by 1, allowing for more powerful cards to be played later in the game, so the player must not only rely on them otherwise they have nothing to play on the first turns. Each deck needs to have exactly 40 cards shared between tricks and plants/zombies. Additionally, each hero has four superpowers which can't be changed and don't count towards the limit. Each card is allowed to have up to 4 copies, and they are classified as either Basic, Premium, Galactic, Colossal, or Triassic, followed by their rarity. Only 10 cards can be in your hand at once. In this case, you cannot draw or Conjure any more cards, and you will not be able to block any attacks until you play some cards so that you have 9 or less cards in your hand. However, it is possible to have more than ten cards in your hand through the Bounce effect. Each class has five basic cards, of which you get four copies whenever you unlock said class. Premium and other non-basic cards can primarily be obtained at the store through card packs, or a free Premium pack obtained by losing multiple battles in a row (three to five; only once if not yet accepted), and their rarity determines the chances of obtaining them via packs. The player can also utilize Sparks to craft them, though Sparks can only be obtained by recycling premium cards. Cards of a higher rarity cost more sparks to craft. There are also limited time offers that offer specific cards or a hero not yet owned.

Like most collectible card games, Plants vs. Zombies Heroes employs many terminologies that are used to refer to the many different mechanics of the game, interactions of cards with each other, and many more. The page above lists and explains the terminologies.

Heroes are the main playable characters in Plants vs. Zombies: Heroes, and the ones required to be defeated so the game can end.
Heroes have unique Superpowers and Classes, the latter of which determines which cards they can play, making each one different from the others.

Each hero leads two different classes which have different types of attacks and traits.

Include, but are not limited to:

Cards are used to create your hero's decks. In each deck, there are 40 cards consisting of Fighters, Tricks and Environments, as well as 4 Superpowers, including the Signature Superpower that is unique to each hero.

Missions are the single player game mode of Plants vs. Zombies Heroes.

Each mission features the main opposing hero that appears in the corner of the mission preview screen, and consists of five stages:

The Boss Battles of each mission have a special gimmick (like a change in the number of cards given, increased or decreased health, or pre-summoned fighters) that can have a powerful effect on the required playstyle. Starting from Mission 21 for each side, the third battle will also have a special gimmick.

Below is the list of missions available to each side.