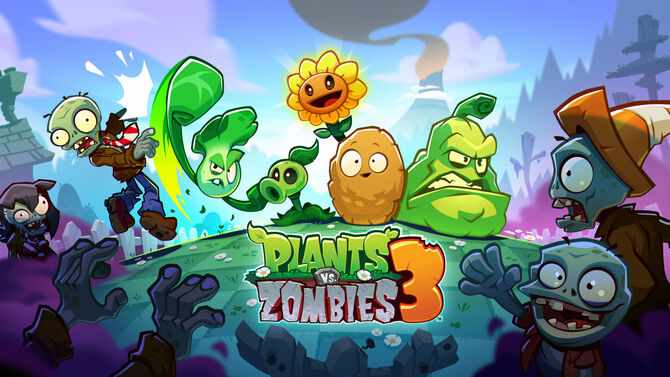 For the Chinese spinoff version, see Plants vs. Zombies 3D.

Plants vs. Zombies 3 (abbreviated as PvZ3) is a tower defense game released by PopCap Games. This game is a sequel to Plants vs. Zombies 2 and the third installment to the main-line franchise. It was released on Android devices for pre-alpha testing on Tuesday, July 16, 2019 for a limited amount of users in the United States and Canada[1]. The pre-alpha ended on February 10, 2020 and was soft launched on February 25, 2020 in select countries, namely the Philippines, Romania, and Indonesia.

Rebuild Neighborville and battle the fun-dead in the latest installment of your beloved tower defense game series — Plants vs. Zombies 3. Defend your town (and brainz) from hordes of zombies with all-new levels, mechanics, and characters. Adventure and gruesome gardening in Neighborville have never been sweeter!

Dr. Zomboss, and his crew of zany zombies have concocted a new, elaborate scheme to conquer Neighborville. Battle zombies to rebuild Neighborville, one lawn at a time, using zombie-bashing strategy, tower defense gameplay and survival game instincts! Push back the Brain Fog and blast your way through all of the town to restore the peace.

Puzzle action and adventure await with every level. Blast through lawns with exciting boosts like the new and improved Cherry Bomb and different plants with unique strengths. Build your plant defense, puzzle your way through tricky zombie challenges and use strategy to protect your brainz. Play with characters, new and old, including your favorite lawn legends and hilarious zombies.

Survive with the help of your potent army of plants and earn the title of Mayor of Neighborville! Download and join the kooky universe of Plants vs. Zombies today!

Tower defense style fun and thrilling action awaits your army of exciting plants on the lawn. Battle to ensure Neighborville’s survival and prove you have what it takes to become the ultimate garden guardian.

- Tower defense like you know and love. Be strategic!

- Battle zombie favorites like Buckethead across a variety of new, exciting lawns

- Learn exciting tricks to restore the town as you encounter new, powerful zombies

- Build the best survival strategy to be competitive!

Grow plants and reach new heights with your green-thumb! Plants are your weapon against Dr. Zomboss and his zombie horde. Unleash the power of the sun, plants, and toolshed as you ready for battle on the lawn.

- Grow and rebuild Neighborville as you unlock new tricks, levels and more!

- Fight with your garden’s fullest potential as you discover the latest twists in PvZ3!

Puzzle your way through level upon level with new adventures to play and master. Challenges unlike ever before will test your planting abilities to the extreme!

Garden and zombie action brought to you from a new lens. Play and experience the newly revamped art style of Plants vs. Zombies 3!

Restore Neighborville and earn your zombie-destroyer badge of honor with the latest installment of an epic game: Plants vs. Zombies 3!

On July 16, 2019, PopCap stated that a new Plants vs. Zombies game, Plants vs. Zombies 3, was in development on their forum. The game was in Pre-Alpha and was meant as a way for players to test the game and give feedback for improvements to the game. Many of the requests were listened to, and they helped make the game better, until the Pre-Alpha was closed on February 10th, when the developers stated they were going through a new phase in development.

Later, on February 25th, 2020, PopCap revealed the game to a few select countries for a soft-launch phase.

On September 7th, 2021, PopCap soft-launched a new version of the game with everything reworked.

On April 5th, 2022, PopCap soft-released another new version of the game with additions made to the previous build.

This version has added rakes which will kill the first zombie on the lane. It is unlocked at Level 9, Camp

This version also added Sun Boost which will add 2 sun at the starting of the game.

This version also add a mini-game in which when you play the levels, your sunflower will grow and will gives you lunch boxes at a point.

Lunch boxes can be obtained by doing quests.

In Soft-Launch and Pre-Alpha versions, player could get piñatas from various activities to level up their plants.