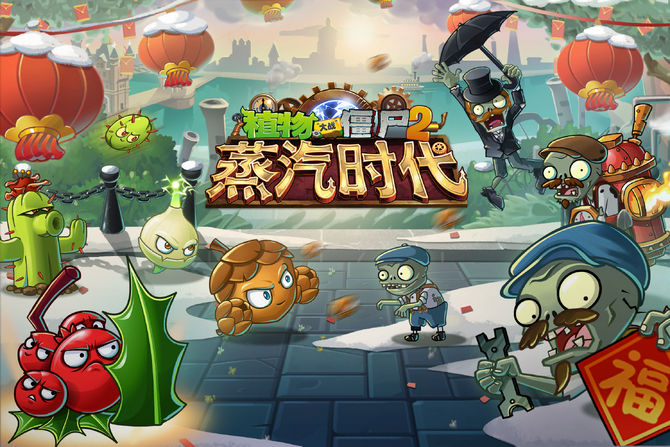 For the international version of this game, see Plants vs. Zombies 2.

Unlike the international version, the player, Crazy Dave and Penny (Penny is Crazy Dave's partner that is a supercar that can time travel), have already arrived in Ancient Egypt. This is where their journey begins.

During gameplay, there is only one power up to be bought: a one-time use Cuke costing 15 gems (the cost will increase by 10, 20, 30 ... for each time per use in a level). It deals massive damage to every zombie on the entire lawn.

Plants and zombies are ranked by levels; the higher ranking a plant, the more enhanced abilities it has; and the higher ranking the zombie, the more health and attack power it has. In order to upgrade a plant, one must collect additional Puzzle Pieces of that plant and send it to Penny to upgrade it (see Plant upgrade system for details). Upgrading plants are required for higher levels as non-upgraded plants will fail to take care of the most basic zombies in higher levels. For example, a level 1 (

) Conehead Zombie by itself.

To progress to the next world, the player must use stars or 58 diamonds. All worlds require the same amount of stars to unlock, but the amount gradually increases every time you unlock a world.

Stars are a form of collectable in the game, appearing in most levels of the game. Beating the level while meeting zombies with a higher level (Hard mode) will earn the player two more stars. These star challenges only unlock when you have obtained the first star by completing the level normally. The more stars the player has beforehand, the higher is the zombies' level in Hard mode. Collecting stars allows the player to unlock specific plants and upgrades like Sun Shovel or Extra Seed Slot. If the player already has the plants, a respective number of pieces will be given to them instead. Completing star challenges will also open chests, which will give you Puzzle Pieces, coins,and in some levels, gems.

The player fights in three modes, where they can obtain normal and costume Puzzle Pieces and coins. Some of the modes are only available on specific days of the week.

This was added in the 1.4.0 update. The game contains items called Pendants that the player can equip onto their plants. By doing so, the plant receives a buff, the effect dependent on the attachment itself. Attachments are tiered into four levels, the effects of an attachment being more potent the higher up it is.

One feature of this game is its lottery system which allows players to obtain plants, costumes, or puzzle pieces. There are three types of chests: Common, Rare and Legendary. Each chest cost gems to open. The player can also spend many gems to open multiple chests at once. The Ordinary Chest can be opened for free once each day and the Rare Chest can be opened for free once every three days.

It was added in the 1.8.0 update. Penny's Store lets you buy different plant Puzzle Pieces. New Puzzle Pieces will replace them after an amount of time. On weekends, the number of puzzle pieces sold are doubled. The puzzle pieces can be bought with either 5,000 or 10,000 coins (Common/Uncommon plants) / 15 or 30 gems (Rare/Super-Rare plants). Sometimes, there are discounts, usually there is a 30% off discount. Legendary plants don't appear in the store.

Added in the 2.0.0 update, this mode is located in the Plants section. It is very similar to the Plant upgrade system in Plants vs. Zombies 2. This lets the player increases the stats of his/her plants in a family. Each time the player upgrades a plant in a family, it will give the plant family an upgrade that has a random stat increased for a random amount. Each family can only choose 1 upgrade. The player is able to upgrade his/her plants in that family for free 3 times a day. If he/she wants to upgrade more he/she will have to pay gems for every upgrade after that. The player can also pay 100 gems to unlock a new upgrade slot, but the upgrades in this slot are more powerful. Getting more plants in a family will upgrade the level of that family, which will increase later upgrades' power.

Endless Challenge (无尽挑战) is an event in the Chinese version of Plants vs. Zombies 2. It is a worldwide competition and the rewards are a currency called Time Tokens. It is only held on Thursdays, Fridays, Saturdays, and Sundays.

Since it was first released, this game has been updated monthly with new content and other tweaks. Check this article to see the update history of this game.

Check these articles to see concept art of the game and upcoming content that is going to be added in future updates. However, beware, as there are spoilers ahead.

Check this list to find glitches that this game has and maybe how to fix them.

In this game, the player already starts off with Peashooter, Sunflower, Wall-nut, Potato Mine, Shovel, and the Tactical Cuke. They also already arrived in Ancient Egypt - Day 1. They are also introduced to Mummy Zombie, Conehead Mummy, Flag Mummy Zombie, and Plant Food. After the player finished Ancient Egypt - Ultimate Challenge, the player is shown with other worlds to unlock with the stars they have. In each world, the player encounters different zombies, with new plants and gimmicks.

Start a Discussion Discussions about Plants vs. Zombies 2 (Chinese version)