The following is a list of all the found glitches in Plants vs. Zombies 2 (Chinese version) that aren't found in the international version. Feel free to add more if you discover ones that are not written here.

You can replay quests with the Travel Log with a glitch. Finish a quest offline and then turn on WiFi once again. Go to the Travel Log, it should be at the world quests tab with 2 quests for each world. One for the Gargantuar battle and one for the boss battle.

There are several glitches about Furnace Zombie:

There is a very rare glitch where sometimes if you complete a level, a zombie shadow that is not targeted by any plants and can only be killed by the Tactical Cuke walks to your house and eats your brains.

If one places down a leveled up Kiwifruit during a level then leaves the game for a while, when the player comes back, the Kiwifruit will use his level 5 ability while still retaining his basic attack, making him even more powerful.

In some download links for version 2.0.1, you can notice that some files are missing when checked in Root Explorer, including File_NoBackup, which contains the player's data (pp.dat). If this happens, there is no way to play your game, and the entire file is a waste. This bug still hasn't been fixed yet.

Fume-shroom doesn't shine at all!?

This glitch will happen if Spore-shroom turned a zombie into Fume-shroom. Sometimes, Fume-shroom may activates it Plant Food effect (indicated to level 4) but it doesn't even shine at all. The animation will not play, and the zombies either get sucked into it, die instantly, or get stuck outside the lawn.

This is a glitch to allow an allied zombie from either Hypno-shroom, Magic-shroom's Plant Food effect, or Pumpkin Witch to either reset its progress across the lawn or eat your brains.

Note that this can only be done in Jurassic Marsh, as Perfume-shroom cannot be used anywhere else.

Note that if this is done when the zombie is further away from your house, it walks back a couple of squares left before resuming its progress right.

If you put a Pendant pot on a Level 4 plant, the pot will appear on every one of those plants in every base in PvP Mode even if other players do not have the pot on that same plant.

This was discovered in the Children's Day Event.

When the player digs up a plant in a conveyor belt level, the player will receive sun, although no sun is given in these types of levels. The sun goes to where it normally flies to, but ultimately does nothing.

The game won't let you escape

If an Aggro Brocco is grabbing a zombie and an Archmage Zombie causes it to sleep, the zombie will stay in place until the Aggro Brocco wakes up.

Out of bar glitch

A sub-glitch to the Final Wave glitch

Note: This only works on Kongfu World Day 9, 15, and Last Stand levels.

Note: This also works when fighting Blade-Wielding Hero but wait for it to raise its sword and strike the lawn, causing a shockwave to topple down two plants pushing the front plant two squares away.

Do not plant here 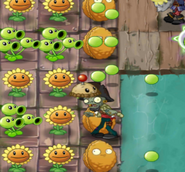 Note: This only appears in the Android version.

If you look closely on the Zombie Bull, there is a Zombie Bull Rider head on it, but it's also on the lawn.
Add a photo to this gallery

During select moments, Penny's sprites won't load properly, and will result in a glitched penny, where the sprites will have a black bar under it. It is unknown if this can happen with Crazy Dave.

Too many star coins

In pvp mode,it it is possible to have more star coins then the limit.It is unknown currently how or why this happens.

The glitch.
Add a photo to this gallery

Retrieved from "https://plantsvszombies.fandom.com/wiki/Plants_vs._Zombies_2_(Chinese_version)/Glitches?oldid=2269353"
Community content is available under CC-BY-SA unless otherwise noted.