< Plants vs. Zombies 2
View source
watch 02:30
Dead Cells Final DLC - The Loop
Do you like this video?
Play Sound

BANANA!
This article is about an upcoming part of a Plants vs. Zombies game. The contents may change, and spoilers may be revealed. Read at your own risk!

This page lists upcoming content for Plants vs. Zombies 2. Please note that things change over time and that some things listed now might become scrapped later. For these reasons, the concepts page serves as an archive of past features.

Blockoli is an upcoming plant found in the code for Plants vs. Zombies 2. He is a defensive plant who blocks off zombies with two floret sheild that he holds with each arm. Blockoli is also able to slam his floret sheilds in order to stun any nearby zombies.

Smash and stun with shields. 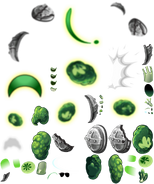 Buttercup's sweet as can be, but she packs a wallop! "I'm not cheap," she says, referring to her flat 25 sun cost. "I'm reasonable."

Nightcap shoots piercing poisonous stars down the lane and withdraws into a toxic stealth mode when zombies get too close.

Nightcap's always had a keen sense for justice, back from when she was a tiny spore watching late-night ninja movies instead of concentrating on her mycology homework.

A brand new loading screen will be added in the 9.5.1 update. It adds Blockoli and Buttercap.

Lunar Zoo Year is an upcoming event planned for the new Thymed events gamemode. As the name would entail, this event is based on Chinese Lunar New Year.

Wild West, Dark Ages, and Jurassic Marsh's Ultimate Battle and Minigame music have been found in the files for the game. There is also code present which enables the music for these worlds. It is presumed they will be making their return in a future update.

These are the upcoming events found in the codes for Plants vs. Zombies 2.

Upcoming events found in the codes for Plants vs. Zombies 2.