The DS card will automatically read the system username and display it on the main menu, regardless of which system the card is in.

Overall, if the player does not care about downscaled graphics, minor glitches, slight performance issues, and has a DS, DSi, 2DS, 3DS, or New N3DS, Plants vs. Zombies Nintendo DS is perfect for them. It is now out on DSiWare as well with the additional content.

The differences from other versions include downscaled sprites, slow framerate when prone to lagging, slight changes in music and sound, new mini-games, achievements, Versus Mode, and slower processing speed. This version is slightly harder than PC and iOS versions - like on the iOS versions, you can only upgrade to nine seed slots instead of ten. Some zombies also appear to be stronger, thus some setups that work with other versions will not work (the Last Stand Mini-game, for example). The Jack-in-the-Box Zombie almost always explodes after going four or five squares and Football Zombies run and eat faster.

Several mini-games such as Homerun Derby and Air Raid (DS mini-game) are exclusive to the DS version. (It should be noted that the cancelled mini-game in the PC version known as "Air Raid" is not the same as the DS version.) The mini-game Big Trouble Little Zombie, and its 3-5 counterpart have both been replaced by Heat Wave, which utilizes the systems' microphone feature. Also, unlike other versions, you always have to drag the plants to their spots as the tapping to plant mechanic from the iOS version is not included. Due to the fact that there are two screens, the Almanac is structured differently.

A promotional image advertising the game 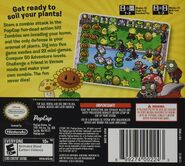 Box cover back
Add a photo to this gallery

Homerun Derby, one of the new mini-games 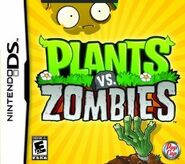 External view of the box cover 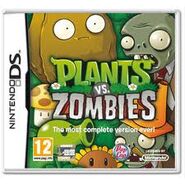 Internal view of the box cover 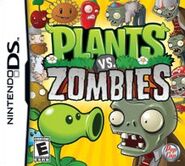 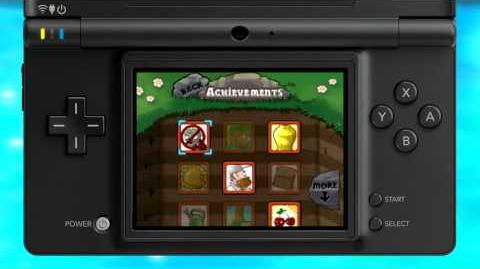 Plants vs. Zombies DS Game Trailer
Trailer
Add a photo to this gallery

On Roof levels, if a player plants a Wall-nut on an imitated potted plant with the potted plant (non-imitated) in the inventory for the level in addition to the Imitater, the Imitater will have a normal icon but will look like a Wall-nut that is partly eaten with a full-health face. It is colored silver in the middle, a dark-brown on the sides, and has "hypnotic" styled red eyes.

If a player fills up with the screen with Gatling Peas and Gatling Peas on Lily Pads and protects all of them with Pumpkins in the Last Stand, the game will freeze but the sound effects and background music will keep playing. This glitch is also extremely common in Survival: Endless, especially when the player chooses to employ multiple cob cannons.

(Note: These small game glitches also apply to the Nintendo DSiWare version of the game.)

Retrieved from "https://plantsvszombies.fandom.com/wiki/Plants_vs._Zombies_(Nintendo_DS)?oldid=2371448"
Community content is available under CC-BY-SA unless otherwise noted.