Plants vs. Zombies: Petal to the Metal is a comic that was released after the Plants vs. Zombies: Garden Warfare comic. The comic is mostly about the plants and zombies making cars and racing, in which the loser is kicked out from the city. 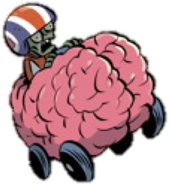 One of Dr. Zomboss's cars

“Mr. Massive Munch Machine! You the nastiest thing I ever seen!

You Peashooters and you cute mushrooms! Just step on up and meet your doom!”

Retrieved from "https://plantsvszombies.fandom.com/wiki/Plants_vs._Zombies:_Petal_to_the_Metal?oldid=2292688"
Community content is available under CC-BY-SA unless otherwise noted.