List of scrapped content for Plants vs. Zombies: Garden Warfare 2. It should be noted that these descriptions are not fabricated but are primarily found in various versions of the game's code.

Power Lily was supposed to be a Spawnable, but was scrapped for an unknown reason. Her ability was to raise the attack damage of nearby plants using a beam similar to Hover Goat-3000's Damage Buff Booster Beam. However, this was unfinished, and she uses Sunflower's Heal Beam in the game.

Magnifying Grass was supposed to be a Spawnable, but was scrapped for an unknown reason. Her ability was to reduce the damage taken by zombie attacks by latching to zombies using a unique beam. However, this was unfinished, and she uses Sunflower's Heal Beam in the game. 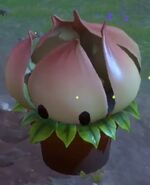 Power Lily's appearance in the game

The Laser Goat is an unfinished character that is only obtainable through hacking. It is on both the plants and the zombies' side. It has green armor if it's on the plants' side, and dark purple armor if it's on the zombies' side. It can jump high and even has a double jump like the Imp. You can actually see this character in-game currently, but only when someone hacks it in. Its primary weapon currently has an unfinished name, reading "ID CU5 H WEAPON LASERGOAT PRIMARY" when vanquished by it. Its icon, sounds, and projectiles are the same as Hover Goat-3000's. Its primary weapon has infinite ammo and can overheat, and during the overheat penalty it uses the particle effect from Citron's Orange Beam.

On the zombies' team from the front 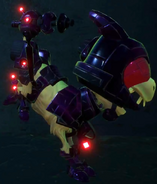 On the zombies' team from the left side

Another image of the goat on the zombies team

Laser Goat on the plant side

Plant Lasergoat in the Portal

Zombie Lasergoat in the Portal

Zombie Lasergoat using Healbelch
Add a photo to this gallery

It is confirmed to be a scrapped ability for the Cactus.

It is an alternative ability to the Tallnut Battlement, only an icon and an unused buffing effect that would allow the Cactus to deal more damage whenever it got a cover assist. Confirmed to be scrapped.

An ability for the Torchwood that acts similarly to the All-Star's Sprint Tackle ability, Torchwood will rush forward and smash his hand on the floor, dealing 75 damage to all zombies within the radius. Confirmed to be scrapped.

Bling version of Potato Nugget Mines. They have a unique model and effects but have no icon.

Unused alternative EMPeach. It doesn't stun, but it deals 50 damage and ignores armor.

Bling version of the Zombie Heal Station. It has a unique model and effects but has no icon.

It seems to be a scrapped ability for the Imp. Its primary weapon is a laser and can call in a Cone Strike like Zombot Drone. It had appeared in the E3 trailer for Garden Warfare 2.

Scrapped variant for the Tall-nut Battlement which would have given plants behind it a damage boost. It has an icon and may have been scrapped due to its range being presumably difficult to recognize.

Unused alternate Big Bolt Blaster. It's an AI controlled Big Bolt Blaster that automatically tracks and shoots at plants. This may have been an inspiration for the Heavy Helpers

Future Nut's icon (one of the only remnants of the ability) 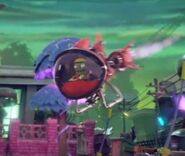 5 Smaller Boss Icons
Add a photo to this gallery

Imitater is an unused plant Boss Hunt boss. It has the unique ability to transform into various zombie bosses.

Image of the Imitater boss in the code 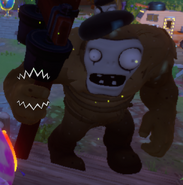 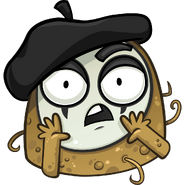 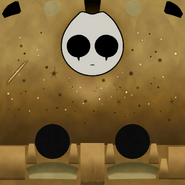 Imitater textures
Add a photo to this gallery

A Z-Mech that is also identified as a boss. It comes with its own Imp called Renegade Imp in the coding. It would have had 500 health and had 3 abilities: 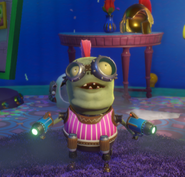 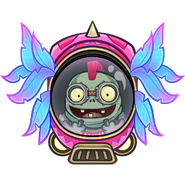 Its icon
Add a photo to this gallery

Unused Variation of the Super Bean, in a similar fashion to Giga Gargantuar. Its attacks have red effects instead of blue effects. Has an icon as well. He has his own abilities as well, and they are: 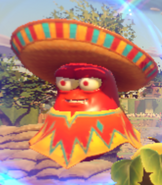 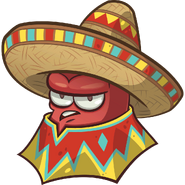 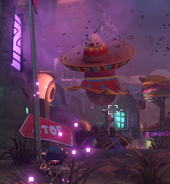 Super Chili Bean in the Backyard

Other Scrapped and Unused Bosses icons 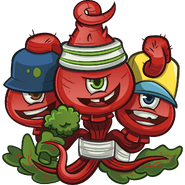 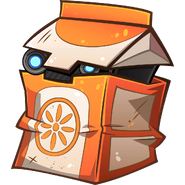 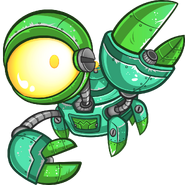 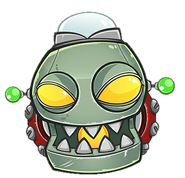 Zombot's icon
Add a photo to this gallery

The Wishing Well was part of a scrapped donation system featured in the game, where players could travel to different Backyard Battlegrounds and leave Stars in other players' wishing well. However, this was removed due to cheating and exploit issues that might have occurred. 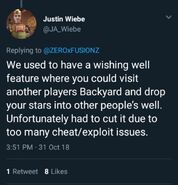 The Tale of the Taco event has many scrapped features that were left unused. An example of which is Talk-O, which would have been a telescope players could interact with to talk to the taco on the Town Hall. The taco was referred to as "the taco of your dreams." After the dialogue with the taco, the player would see a screen that would have shown rewards. It is presumed that these rewards would have been for Plants vs. Zombies: Battle for Neighborville, as the name for that game was also found within the UI setups for the reward screen.

Another thing left unused was a Propulsive Salsa mode. This mode would've been a take on Team Vanquish, and would have appeared during Week 2 of Tale of the Taco. For reasons likely relating to the release of Plants vs. Zombies: Battle for Neighborville: Founders Edition, it was cut at the last minute. The gameplay of the mode is similar to normal Team Vanquish, except there are salsa pickups hidden around the map. These pickups would have given players a lot of buffs, such as low gravity. 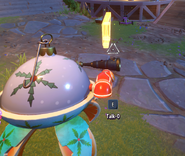 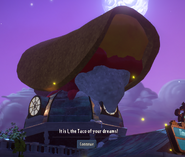 Tiered rewards
Add a photo to this gallery

Unused story mode music can be found in the files. It is unknown what they would have been used for, but it is probably there because the story mode background music was going to have two versions.

Great White North has 3 unused music tracks, all of which are for the zombies. They would have been used for the zombie takeover tracks, but only one of them was used.

NOTE: Names for these tracks are based off of their filenames. Version 2 is the used version.

There exists an unused idle animation for Crazy Dave in the game. As Crazy Dave only appears for certain dialogue in the actual game, this is left unused.

Retrieved from "https://plantsvszombies.fandom.com/wiki/Plants_vs._Zombies:_Garden_Warfare_2/Concepts?oldid=2280277"
Community content is available under CC-BY-SA unless otherwise noted.