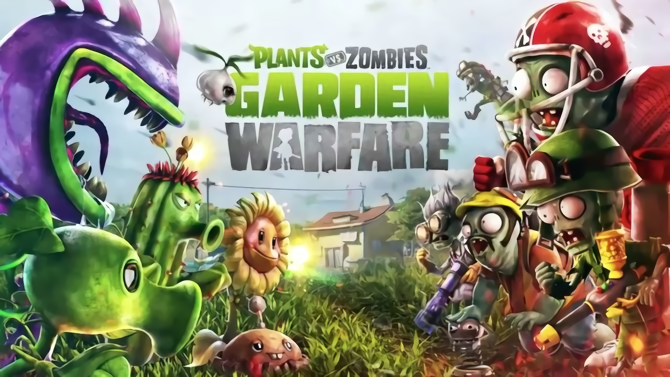 Not to be confused with the comic with the same name.

It was first heard on EA's E3 press conference on June 10th, 2013, in which the trailer and gameplay were shown. The game was released on the Xbox 360 and the Xbox One on February 25 in North America and February 28 in Europe in 2014. A PC release came out on June 24, 2014, and a PlayStation 3 and a PlayStation 4 release came out on August 18, 2014. It is followed by Plants vs. Zombies: Garden Warfare 2, another third person shooter made by PopCap Games.

Dig into the trenches with an explosive new action experience. Enter a massive, mind-blowing PvZ world where plants and zombies are battle-ready troops in epic new challenges. Join forces with friends in Garden Ops, or choose your side in “Gardens & Graveyards” Multiplayer. Get ready for the next generation of PvZ action and sow the seeds of victory!

Crash Course
Add a photo to this gallery

The zombies must enter a cannon and launch themselves to the Mega Sunflower Lighthouse, trying to destroy it while dodging fire from the Flax Cannon.

The zombies must go to the Tactical Cuke and arm four bombs, while dodging giant explosive corn cobs being shot by the Corn Mortars.

Get five zombies into the mansion, while Tallnut Cannons are shooting Tallnuts down the street killing both plants and zombies.

Plants defend a giant cactus signaling the 18th hole in golf, the zombies must defend the golf-bomb while pushing it until it goes in.

Cactus Canyon Night
Add a photo to this gallery

Plants vs. Zombies: Garden Warfare has received mixed reviews from critic websites. Some reviews praise it in its lighthearted, team-based, and comical aspects, but others criticize its lack of diversity and content. Many reviews also praised for its strong balance between the varied classes, enough so that none feel over-powered or weak. However, the greatest common problem among reviewers is its lack of diversity from other shooters available at the time of release.

Start a Discussion Discussions about Plants vs. Zombies: Garden Warfare