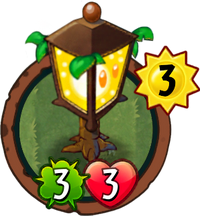 For other uses, see Plantern (disambiguation).

Bullseye.
Past job experience includes: Shooing away creepy fog.
Plantern is a galactic uncommon plant card in Plants vs. Zombies Heroes and a member of the

Bullseye trait when it is in an environment. Its closest zombie counterpart is Iron Boarder.

However, its appearance is closer to its scrapped Plants vs. Zombies: All Stars design.

Its description references its original ability in Plants vs. Zombies.

This can potentially be one of the most potent

Bullseye plants in the entire game. It has good stats, especially when combined with its ability, and stacks with the abilities of plant environments it is played on. For example, Spikeweed Sector can add 2 damage on top of the damage it normally does, or clear a path to attack your opponent, which makes good use of its

Bullseye trait. Pair Pearadise can make another Plantern on that same lane, allowing for more damage overall. When you consider all of the environments in the game, there are many options for boosting Plantern, making it more potent.

Since it is a root plant, it does synergize with Starch-Lord to get more strength and health, making it more of a force to be reckoned with.

If your opponent plays a strong zombie against it, you can play a Team-Up plant,

Freeze the zombie, or make it do a bonus attack to prevent Plantern from being destroyed. If they play a weak zombie to sponge Plantern's attack, you can remove the zombie with tricks like Whack-a-Zombie or Berry Blast, or give it the

Strikethrough trait via Sun Strike so that it can hit your opponent no matter what.

This plant can be very dangerous if it is in an environment, with it being able to put a big dent on you as early as turn 3. On top of that, it has the

Bullseye trait, meaning your Super-Block Meter will not fill at all when it attacks you. Overriding your opponent's environments may remove the extra benefits given by them, but it won't help against Plantern's boost as its ability activates even in zombie environments. Do not put it in Hunting Grounds, becuse the plant hero can just play another plant to move it away, thus giving you 4 unblockable damage to the face.

Therefore, the best way is to either destroy Plantern so that it can't cause any further trouble, Bounce it with Pogo Bouncer or Excavator Zombie, or move it out of the environment so that it becomes less threatening. You can use powerful zombies to destroy it, but tricks are still the best way to deal with it. The best example of such a trick is Rocket Science. Another option is to use cards like Terrify, Sumo Wrestler, and Rodeo Gargantuar to move it away from environments, getting rid of its stat boosts, although you will have to watch out for Grave Buster and Blockbuster. If you decide to move Plantern, move it onto a heights lane, as environments can't be played there, shutting down any boosting opportunities unless your opponent also has moving cards. 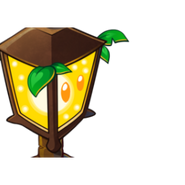 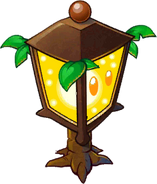 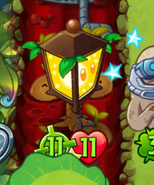 Plantern with a star icon on its strength

Two Planterns on a lane due to Pair Pearadise's ability, but with Pear Pearadise replaced by Force Field 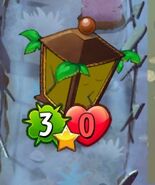 Evaporate being played on Plantern
Add a photo to this gallery

Retrieved from "https://plantsvszombies.fandom.com/wiki/Plantern_(PvZH)?oldid=2285558"
Community content is available under CC-BY-SA unless otherwise noted.